Leflunomide has been reported to impair ulcer healing by inhibiting DNA synthesis. To the best of our knowledge, we report a first case of non-healing gastric ulcer in a patient treated with leflunomide for rheumatoid arthritis. Patient developed gastric ulcer secondary to NSAID use which did not heal for several years despite being on PPI therapy and avoiding NSAIDs. Gastric ulcer healing was documented after stopping leflunomide.

A 76-year-old male with past medical history of hypertension, rheumatoid arthritis on leflunomide and methotrexate, non-melanoma skin cancer and osteoporosis presented to the GI clinic 4 years ago with complaints of epigastric pain. He had complaints of non-radiating epigastric pain for 6 weeks. It was associated with nausea, vomiting, poor appetite and unintentional weight loss of 15 lbs. He uses NSAIDs occasionally for arthritis pain. He denied melena, hematemesis or coffee ground emesis. No significant surgical history. Family history was negative for stomach ulcer or cancer. He was a former smoker, denied alcohol or illicit drug use. Medication history included daily aspirin 81 mg, oral leflunomide 20 mg once daily for past 5 years, weekly methotrexate 15 mg, folic acid 1 mg daily, NSAIDs as needed for pain and denosumab subcutaneous injection every 6 months. On examination vitals were stable and abdominal examination was significant for mild epigastric tenderness. Labs showed mild normocytic anemia with Hb at 12.5 gm/dl. Comprehensive metabolic panel was within normal range.

Patient underwent further evaluation with esophagogastroduodenoscopy (EGD). EGD showed 1.5 cm non-bleeding clean based ulcer in the gastric antrum likely secondary to NSAID use as shown in Figure 1. Gastric ulcer biopsy was negative for H. pylori infection and malignancy. Patient was treated with PPI for 2 months and recommended to stop NSAIDs and have repeat EGD for follow up in 2 months. Patient did not follow up with GI for the next 2 years. Two years later patient was seen in the GI clinic again due to persistent epigastric pain and was willing to undergo repeat EGD. Patient denied using any NSAIDs except for aspirin 81 mg daily for last 2 years. Repeat EGD showed persistent non healing 1.5 cm clean based ulcer at the same location. Patient was recommended to stop aspirin 81 mg and continue PPI treatment. Despite discontinuing NSAIDS including aspirin and continued PPI treatment with good compliance, gastric ulcer persisted in three repeat EGDs done over the next 2 years. Repeat gastric ulcer biopsy was negative for H. pylori, viral infection including CMV, EBV, HSV and vascular abnormalities. Flow cytometry was negative for gastric lymphoma as shown in Figure 2. Gastric wall biopsies were obtained as per Sydney protocol to rule out H. pylori infection and was negative. Computed Tomography (CT) of the abdomen with contrast was obtained and was negative for any invasive gastric cancer. In consultation with Rheumatology, patient was recommended to stop leflunomide as well as methotrexate at this time. Eight months later, he underwent repeat EGD which showed completely healed gastric ulcer scar as shown in Figure 3. Off methotrexate and leflunomide, patient experienced pain and swelling of hand joints which was treated with joint injections. Rheumatoid arthritis remained stable since then. 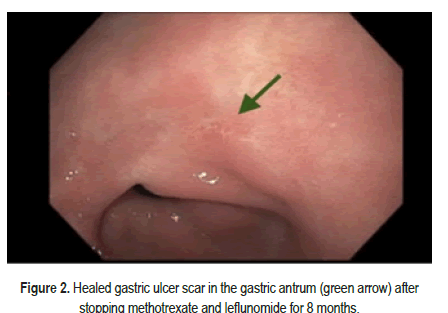 Leflunomide (active metabolite teriflunomide/A77 1726) is a pyrimidine synthesis inhibitor which inhibits DNA synthesis.4 Methotrexate is a dihydrofolate inhibitor which affects de novo purine synthesis and thymidine synthesis thereby inhibiting DNA synthesis [4]. Most common side effects of leflunomide and methotrexate include diarrhea, nausea, dyspepsia, elevated liver enzymes, rashes and mucosal inflammation like stomatitis [5]. Gastric ulcers occur due to breakdown of the gastric mucosal lining and re-epithelization is required for ulcer healing [6]. The rapid proliferation that is necessary for re-epithelialization of an ulcer requires a significant increase in pyrimidine ribonucleotides levels, mostly rUMP, in order for the cells to synthesize DNA and progress from G1 through the S phase of the cell cycle [7]. Leflunomide hampers pyrimidine synthesis, causes G1 phase arrest and restrains healing [8]. In our patient, the likely reason for nonhealing persistent gastric ulcer is secondary to impaired ulcer healing from leflunomide rather than methotrexate based on the available evidence from the literature.

When evaluating a patient with persistent non healing gastric ulcer with unclear cause, it is important to review the patient’s medication history and its potential side effects. In our case, there was a delay in this diagnosis for about 3 years. During this period, patient had undergone multiple EGDs putting him at unnecessary risk for procedure and sedation related complications. Our unique case will increase awareness among clinicians for this adverse event. They should consider stopping leflunomide to help heal non-healing ulcers. Any patients taking DMARDs especially leflunomide must be made aware of this potential adverse effects on wound healing. We believe further studies are needed to better define the role of DMARDs especially leflunomide on its effect on would healing and help guide the prudent management of leflunomide by the clinician.