Objectives: To understand the contribution of cytology in the process of etiological diagnosis of pleurisy.

Materials and Methods: We conducted a retrospective and prospective descriptive study from March 1, 2010 to February 28, 2015. The material used consisted of the results of cytological analysis reports.

Results: Of the 2012 samples collected, 456 were pleural fluids, an institutional prevalence of 22.66%. Patients under 50 years of age were affected in 49.12% with an average age of 47.5 years and extremes of 10 months and 101 years. The male subject represented 72.81% or a ratio of 2.74. The samples were exudative in 94.52% and the "Hemorrhagic" character found in 52%. 88% of the samples had a cell count and among which, 44% had a leukocyte count ≥ 10,000 / mm³. Lymphocyte reactions were found in 59.16%. 39.22% of patients ≥ 50 years of age had a lymphocyte reaction. In samples with cell atypia, 54.46% were suspected of having a tumor extension and 21.43% were tumor cell atypia of specified origin, of which 8 cases (33.33%) were of ovarian origin. The "Hemorrhagic" character was in 57.27% of the cellular atypies and the lymphocyte reactions in 66.36% of the atypies. Conclusion: The aim of this study was to understand the contribution of cytology in the process of etiological diagnosis of pleurisy. Patients of all ages were affected, the male was the most represented. A cell count associated with a leukocyte formula and the morphological search for atypical cells made it possible to provide an etiological orientation.

Pleurisy is defined by the presence in the pleural space of an abnormal amount of fluid. Pleural pleurisies are frequent in pneumology and include numerous and diverse pathological entities. Etiological research requires a wide and sometimes difficult differential diagnosis, all the more so since conventional imaging by radiology, ultrasound, computed tomography and nuclear magnetic resonance, does not have any specific diagnostic criteria, in particular malignancy [1-3]. Macroscopic and microscopic analysis of pleural fluid generally provides information on the etiology of the effusion. The prognosis of pleurisy for the most part depends on the speed of the etiological diagnosis and the initiation of appropriate treatment. Cytology plays a very important role in the etiological diagnosis of pleurisy. Its sensitivity is important since it is 45 to 60% in cancers [4]. In developed countries, the frequency of pleural effusions, particularly of infectious origin, is clearly decreasing due to early diagnosis and appropriate antibiotic therapy. In 50 years their frequency has increased from 1/50 to 1/155 and their prognosis has also been favorably transformed [2].

In developing countries where diagnostic and therapeutic delay remains frequent, pleurisy retains some of the aspects it once revealed in Europe and the United States. If the diagnosis of pleurisy is easily made by clinical examination and chest radiography, etiological research in developing countries constitutes a challenge for the pulmonologist [2,5]. In Niger, few studies have been carried out on pleurisy. That carried out in 2014 on the epidemiological, clinical, etiological and therapeutic aspects of pleurisy reported 5.23% of patients hospitalized for pleurisy [2].

This motivated us to carry out our study with a view to understanding the place of cytology in the process of the etiological diagnosis of pleurisy.

It was a retrospective and prospective descriptive study, focused on cytological examinations of pleurisy carried out at the Laboratory of Histology-Embryology and Cellular Pathology of the University Abdou Moumouni of Niamey during a period of 5 years, going from the 1st March 2010 to February 28, 2015. The study population consisted of all pleural fluid samples, which reached the laboratory for cytological analysis. The sample size is made up of 456 samples. Included in the study were all pleural fluids analyzed in the laboratory for the duration of the study. The variables studied were age, sex, cell count, abundance of hemorrhage in the samples, whether or not the samples were exudate and the presence of atypical cells.

The samples before undergoing the treatments are recorded and a coded identification number is assigned to each sample. After registration the samples undergo the following treatments:

• To carry out the cell count, we used, after dilution and spreading, the Malassez cell.

• For coloring with MAY GRUNWALD GIEMSA (MGG), the slides were fixed in the open air and for PAPANICOLAOU the fixing was done using a hair spray. Apart from these two types of staining, we had sometimes used Alcian blue, P.A.S and Perls for the cytochemistry technique,

• The examination with an optical microscope takes place after the preparatory techniques for the sample. It consisted in morphologically examining the colored spreads (leukocyte formula and cytological analysis) and in carrying out microphotographs. 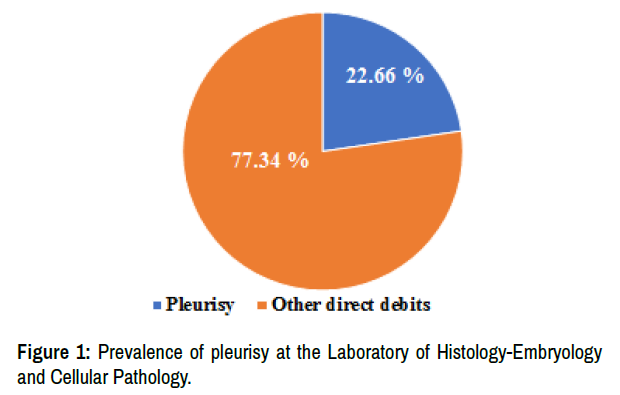 Figure 1: Prevalence of pleurisy at the Laboratory of Histology-Embryology and Cellular Pathology. 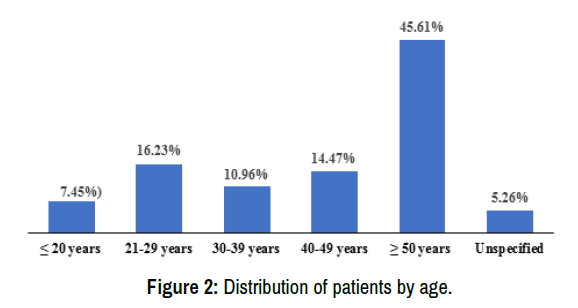 Figure 2: Distribution of patients by age.

Figure 3: Distribution of patients by sex.

Analysis of the samples revealed 94.52% of exudative samples. All the samples presented a hemorrhage but those of a “Hemorrhagic” character were the most represented (238 cases), ie 52%. In the 88% of samples where the rate of leukocyte was specified, the slice most concerned was that whose leukocytosis is ≥ 10 000 / mm³, or 44% (199 cases.) In the samples presenting an inflammatory reaction (431 cases i.e. 94.52%), the lymphocyte reaction was found in 59.16% (255 cases) and this lymphocytic reaction was present regardless of the age group, but predominant in the age group greater than or equal to 50 years or 39.22%. Age was not specified in 10.20% of patients with a lymphocyte reaction.

"Hemorrhagic" character was predominant in 57.27% of all cellular atypies (Figures 4 and 5). 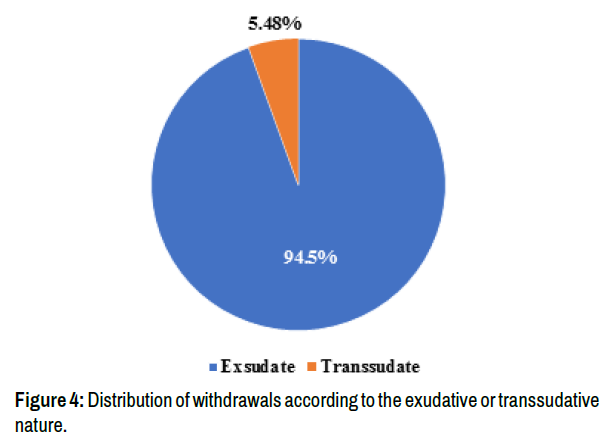 Figure 4: Distribution of withdrawals according to the exudative or transsudative nature. 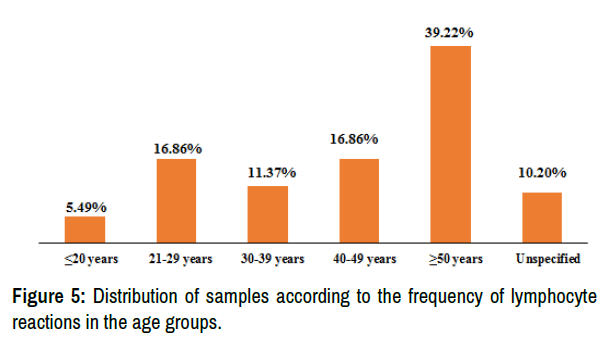 Figure 5: Distribution of samples according to the frequency of lymphocyte reactions in the age groups.

This present study was carried out on the samples analyzed at the Laboratory over a period of 5 years and allowed 456 cases of pleural fluid samples to be collected. The institutional prevalence was 22.66%. Patients under 50 were the most represented, accounting for 49.12% of cases. The average age was 47.5 years with extremes of 10 months and 101 years. These results are similar to those reported by LOTFI S et al (Rabat 2000), JOËLSON LR et al (Madagascar 2011), KAMANI A (Marrakech 2017) as well as by several authors and this predominance in relatively young subjects found by most authors could be explained on the one hand, by the frequency of tuberculosis in this age group, especially in our regions, and on the other hand because of the resurgence linked to the HIV / AIDS pandemic [7-8].

In our study, the male sex was represented in 72.81% of the cases with a sex ratio of 2.68. This male predominance is found in the studies carried out by OUEDRAOGO M et al (Burkina Faso 2000) and DIALLO S et al (Mali 2006), which reported respectively 67.4%, 69.65% of cases for ratios of 1.88 and 2.3 [9-10]. This frequency in the male subject in our context could be explained, especially by the fact of our social considerations which make that on the one hand women consult less often and on the other hand by the fact that they are less exposed risk factors related to smoking.

The protein level in our series revealed that the pleurisy was exudative in 94.52% of the cases. This observation was also reported by several authors including HASSANE YAYE M (Niger 2014), THIAM L et al (Dakar 2014) and SIDIBE A (Bamako 2008), respectively in 92.2%, 100% and 64.1% of case. This exudative nature found by several authors could be explained by the most often inflammatory nature of pleurisy [2,11-12].

In our series, “Hemorrhagic” pleurisy was found in 52% of cases. This “hemorrhagic” character had predominated especially in the samples having presented a cellular atypia, ie 57.27% of the cases. This result is significantly higher than that reported by HASSANE YAYE M who found only 7.84% of hemorrhagic samples. It is likely that in this case the hemorrhage was assessed macroscopically. On the other hand, this result corroborates those reported by DIALLO S et al who found that 60% of hemorrhagic pleurisies were due to cancers. This abundance of hemorrhage in pleurisy testifies, especially in the elderly subject to the character most often neoplastic [2,10,13].

87.72% of the pleurisies analyzed in our study had a cell count. The samples that did not benefit from this count are either transported in poor conditions to the laboratory, or are highly hemorrhagic. The slice most represented was that whose cellularity is greater than or equal to 10,000 Leukocytes / mm³, or 44% of the samples having benefited from cell count. This result is superior to that of DABILGOU ALFRED A (Ouagadougou 2003) which reported that only 10% of pleurisies had a cellularity greater than or equal to 10,000 Leukocytes / mm³ while THIAM L et al (Senegal 2014), reported a similar result to ours by reporting an average cellularity of 14,774 leukocytes / mm3. This pleural hyperleukocytosis indicates the most often infectious nature of pleurisy [4, 11].

The inflammatory reaction was reported in our series in 94.52% of cases, of which 59.16% were predominantly lymphocytic. This lymphocytic reaction was frequent in all age groups, with 39.22% in patients aged 50 or over and 50.58% in relatively young patients, aged under 50 (age between 20 and 49). This predominance of pleural lymphocytosis was also reported by several authors. Its presence in young subjects most often points to a tuberculous origin of pleurisy. The prevalence of tuberculosis in the population is probably exacerbated by the upsurge of the HIV / AIDS pandemic. Lymphocytosis in pleural fluid can also be caused by viral infections or diseases of the system. In the elderly, the presence of a lymphocyte reaction can come from either a tuberculous origin, a tumor process or both. Indeed, tumor effusions always involve a lymphocyte reaction [2-4, 14]. Out of all the samples with an inflammatory reaction, the "Haemorrhagic" character was predominant and lymphocyte reactions were the most concerned with 140 cases out of 255 lymphocyte reactions, ie 54.90%. Pure granulocytic reactions were found in 19.26% of cases. It is generally purulent pleurisy therefore of infectious origin. Mixed inflammatory reactions, 21.58% of the cases in our series corresponded most often to purulent pleurisy in the course of resolution under the effect of antibiotic therapy.

Of the 112 samples containing cellular atypia, 61 cases were suspected of coming from a tumor extension, or 54.46% of the samples with cellular atypia. This result is similar to that reported by ALMOU MAMANE F (Niamey 2010) and MOUSSA NIANDOU I on the effusion of serous cases of ascites, in 50% and 55% respectively [14-15].

The origin of the cellular atypies was specified in 24 cases or 21.43% among which 8 cases or 33.33% were of ovarian origin. This cellular atypia in our study was mainly encountered in patients aged 50 or over. This similarity in age class greater than or equal to 50 years was also found in MOUSSA NIANDOU I as well as in several authors and could be explained by the frequent occurrence of tumors at an advanced age [13, 15-16].

The aim of our study was to determine the contribution of cytology in the process of etiological diagnosis of pleurisy. This study spanned a 5-year period from March 1, 2010 to February 28, 2015 and allowed to collect 456 cases which, after analysis shows that:

Patients of all ages were affected with a predominance in relatively young subjects, under the age of 50 and the male was the most represented.

The establishment of a cell count, a leukocyte formula and the morphological research of atypical cells made it possible to provide an etiological orientation in relation to each sample received in the laboratory, which led to a readjustment of the treatment to the benefit of the patients and of the clinician.

Pleural lymphocytosis and cellular atypies were found in older subjects (≥50 years old). In the tumor setting, the study of cell morphology made it possible to give an orientation for the diagnostic process. However, performance can be improved by the development of cytochemistry, immunocytochemistry and molecular biology.