Inhibitory Potential of Phyto-Constituents from Sorghum Stem on Neuro-modulatory Enzymes: A Computational Approach

Inhibitory Potential of Phyto-Constituents from Sorghum Stem on Neuro-modulatory Enzymes: A Computational Approach

Vertebrate cholinesterases and monoamine oxidase (MOA) play key role in the regulation of the cholinergic system. Inhibitions of these enzymes have emerged as promising target for the management of neurological disorders. In the present study, cholinesterase (acetylcholinesterase (Ache) and butyrylcholinesterase (Bche)) and MOA inhibition potential of secondary metabolites from sorghum stem was elucidated using Glide (Schrodinger maestro 2017-1). The results showed that, the phyto-constituents from sorghum stem binds with higher affinity and lower free energy compared to the standard ligand with quercetin, kaempferol and catechin having glide score of -11.667, -10.599 and -10.535 respectively against Ache. Rutin, quercitrin and chlorogenic acid showed glide score of -12.643, -10.124 and -9.043 against Bche while epicatech, quercetin and kaempferol showed glide score of -10.424, -9.830 and -9.804 against monoamine oxidase. Quercetin has lower glide score against the three enzymes compared to prostigmine (standard ligand). These secondary metabolites provide evidence as small molecules in management of neurodegenerative disorders.

The interaction of ligands and binding sites of proteins often give credence to protein function and drug discovery [13]. The relationship between proteins and ligands can be quantified base on the electrostatic interaction; this interaction is approximated as the docking score of the ligand in relation to active site of the protein [10,14]. The docking results from this study showed the interaction of ten (10) compounds from sorghum stem downloaded from NCBI database against Ache/Bche and MAO. The docking results and ADME toxicity screening of the compounds and standard ligand (prostigmine) were shown in Tables 1-4.

The docking scores of most of the compounds at the binding sites of Bche and MAO revealed that, most of the compounds bind to the active site of the enzymes with lower docking score compared to the standard ligand. Quercetin, kaempferol. Catechin and epicatechin were showed to have lower binding score against Ache compared to progstimine. The results obtained agree with the findings of Srikanth et al. [15] who reported comparative molecular docking study of phytochemicals from Morinda citrifolia on Ache and Bche. Inhibition of the enzymes is dependent on the formation of different bonds between amino acids residues at the binding site and the ligands [10].

The amino acid residues at the bind ingregion of Ache that stabilize Achequercetin interaction are TYR 70, TYR 121, TRP 54, GLY 117, TYR 130, GLH 199, PHE 330 and HIS 440. The interaction between the Bche and rutin was stabilized by ASP 70, ALA 328, PHE 329, LEU 286, HIP 438, ASN 289 and GLH 197 while MAO-epicatechin interaction was stabilized by LEU 177, PHE 343, GLY 434 and ARG 42. These amino acids interacted with the ligands by forming hydrogen-bond or pi-pi stacking as shown in Figures 3-5. These bonds may account for the lowest binding energy observed in the interaction since hydrogen-bond plays a crucial role in determining the specificity of ligand binding [16,17]. 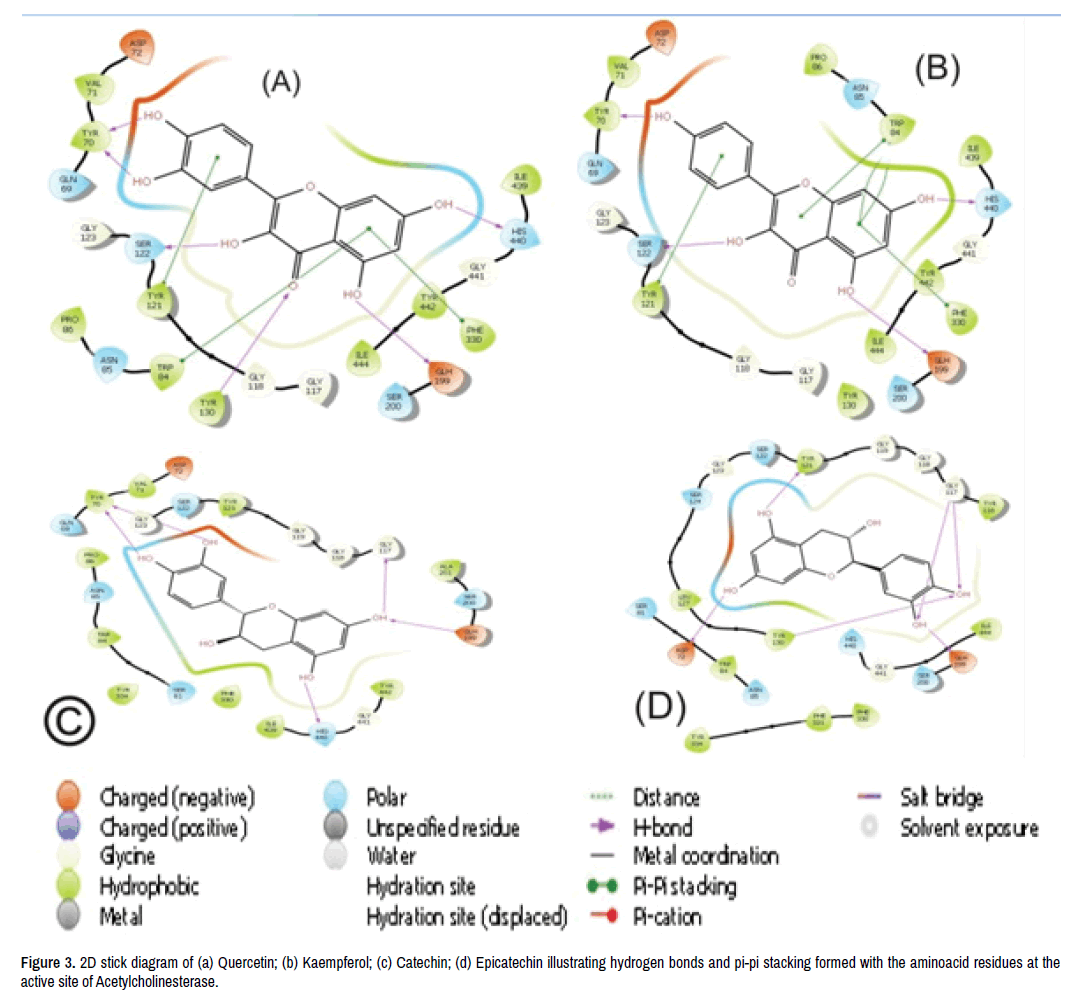 Figure 3. 2D stick diagram of (a) Quercetin; (b) Kaempferol; (c) Catechin; (d) Epicatechin illustrating hydrogen bonds and pi-pi stacking formed with the aminoacid residues at the active site of Acetylcholinesterase. The absorption, distribution, metabolism and elimination (ADME) toxicity screening of compounds depict the efficiency and ability of the ligands to reach its target protein and rate of excretion from the body [10]. The bioinformatics analysis of ADME screening follows the Lipinski’s rule of five (ROF) which is required to dictate the drug-like nature of compounds. These criteria include: molecular weight (< 500 Da), hydrogen bond (≤5) and water partition coefficient (logp) (<5) [10]. Table 4 revealed that, the ADME profile of compounds from sorghum stem agrees with these rules and majorly with medium human oral absorption (HOA). Therefore, they exhibit drug-like character. The result of the docking analysis and ADME screening revealed that, quercetin, kaempferol, catechin, epicatechin, rutin, quercitrin and chlorogenic acid from sorghum stem might be of pharmaceutical importance for the management of neurodegenerative disorders.

Neurodegenerative disorders are diseases of the central and peripheral nervous system, associated with protein aggregation and inflammation as well as oxidant generation in the central nervous system (CNS) [1]. These disorders includes: Alzheimer disease, brain tumors, Parkinson’s disease, epilepsy etc. Various neurological disorders possess common features at cellular and subcellular biological events including the synthesis of new structural and functional protein molecules at the cytosol and endoplasmic reticulum [1]. Insufficient synthesis of neurotransmitters and breaking down of chemical messengers in the synaptic cleft resulting from higher activity of neuronal enzymes such as cholinesterase and monoamine oxidases lead to low concentration of this neurotransmitter which has been linked with cognitive abnormalities [2], since high activity of these enzymes has been attributed to be part of the biological mechanisms associated with neurodegenerative disorders [1].

Cholinesterase including acetylcholineseterase (Ache) and bytyrylcholinesterase (Bche) are involved in the hydrolysis of acetylcholine in the synaptic region while monoamine oxidases (MAOs) are involved in the oxidative deamination of endogenous monoamines neurotransmitter; this enzyme is involve in the deamination of biogenic amines and is present in the CNS and PNS tissues [3]. Neurotransmission by biogenic monoamines is involved in brain functions. These amines balance utilizes the enzyme in neuronal and glial cells. Inhibition of this enzyme, increases monoamines concentration in the synaptic cleft [4].

Synthetic drugs targeting Ache/Bche and MOA are used for the management of neurodegenerative disorders; they are not without side effects such as hepatotoxicity, gastrointestinal disorders, dizziness, diarrhea, vomiting, nausea and pharmacokinetics disadvantages [5,6]. Hence, investigation of natural compounds with Ache/Bche and MAO inhibition potentials used in traditional management of neurological disorders has been the means of searching for new drugs that will liberate human race from these life-threatening disorders.

Sorghum (Sorghum color) is a genus of flowering plants in the family Poaceae, it is one of the most cultivated plants in the world [7]. Antioxidants and bioactive chemicals are abundant in sorghum grains [8]. The stem of the plant has been involved in herbal medicine for management of anaemia and malaria [9]. The sorghum stem extract has been reported to modulate acetylcholinesterase activities [7]. Oboh et al. [7] reported the phenolic compounds present in sorghum stem which might contribute to the Ache/ Bche and MAO inhibitory activities of the plant. However, screening such large number of drug candidates may not be possible due to cost both in term of money and time. Application of bioinformatics tools such as molecular docking may lead to development of neuro-modulatory compounds with Ache/Bche and MAO inhibitory activities. The present study is aimed to determine the molecular interaction of prostigmine and ten (10) phyto-compounds from sorghum stem with Ache/Bche and MAO target enzymes for neurodegenerative drugs. A picture of Sorghum is shown in Figures 1 and 2. 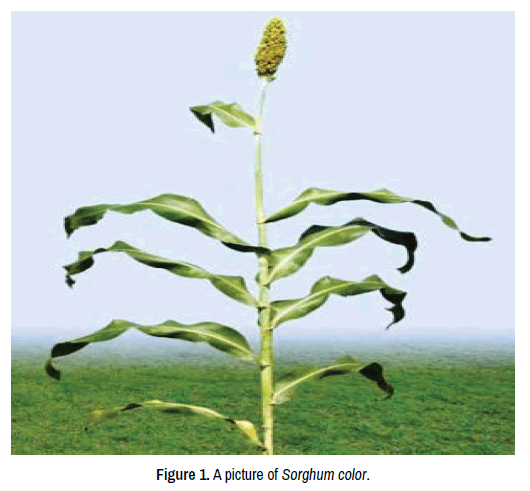 Figure 1. A picture of Sorghum color. 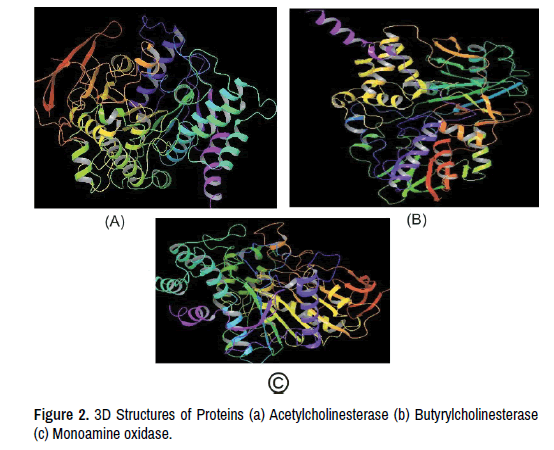 Ten (10) characterized phyto-compounds from sorghum stem used in this study were obtained from Oboh et al. [7]. The compounds were used in the production of compound library downloaded from NCBI PUBCHEM database (www.ncbi.nlm.nih.gov/pccompound) in 2D format. The phyto-compounds and prostigmine were prepared according to David et al. [10].

Crystallized 3D structure of the target proteins; acetylcholinesterase, butyrylcholinesterase and monoamine oxidase were downloaded from protein data bank (http://www.rcsb.org/pdb/home.do). The 3D structures were viewed with maestro 11.5 interface and prepared with wizard at pH 6 ± 1. Water molecules and other interfering ligands were deleted from the protein.

The area of interaction between the proteins and ligands were generated with receptor grid generation tool in maestro 11.5 which is the area around the binding pocket in term of co-ordinates x, y and z.

Molecular docking was carried out using glide tool on maestro 11.5 according to Schrodinger Release 2017-1. The Ligands library (Phytocompounds) were docked into the binding site of the proteins according to standard precision algorithm with the ligand sampling treated as flexible. The ligands interaction tool was used to view the interaction diagram of the ligands with the residues at the binding site of the proteins [11].

The ligands were subjected to absorption, distribution, metabolism, excretion screening using the Qikprop tool on maestro 11.5 according to Schrodinger Release [12].

From the in silico study, phyto-compounds from sorghum stem could be potential inhibitor of Ache/Bche and MAO proteins. These phyto-compounds showed better molecular interaction than the standard ligand (prostigmine) via hydrogen bond and pi-pi stacking. These results depicted new insight into the therapeutic use of sorghum for the management of neurodegenerative disorders.

The Authors wish to acknowledge Adelakun N.S. of Center for Bioinformatics and Drug Discovery, Adekunle Ajasin University, Akungba- Akoko, Ondo State for providing the software for the analysis.