Preimplantation Genetic Testing (PGT) is a special technique in Assisted Reproduction Field that is applied to avoid a variety of hereditary disorders. This case report presents the first experience with rare X-linked Choroideremia disease (CHM), which leads to total blindness in male members of the family. To achieve a live birth in this case a total of 3 IVF procedures and 3 PGT cycles were performed. The data in our case offer the chance to couples suffering from rare genetic ophthalmo-neurological diseases to have healthy offspring.

Choroideremia (CHM) is a rare X-linked hereditary disorder that leads to the degeneration of the choriocapillaris, the retinal pigment epithelium, and the photoreceptor of the eye [1]. CHM causes progressive vision loss that finally leads to total blindness. It mainly affects males and the first symptom is usually nyctalopia at early childhood or puberty. Tunnel vision follows as the disease progresses and later the next symptom is visual acuity. The vision impairment worsens over time but the progression of choroideremia differs between patients, even within the same family [2]. Heterozygous females are mostly asymptomatic but often show striking funduscopic changes such as irregular pigmentation and atrophy around the optic disc [2-4]. Some fully affected females have been reported in the literature [5,6].

Choroideremia is a rather rare disease since it affects almost 1 out of 50000-100000 people, but its frequency may be underestimated since there are similarities with other eye disorders that also lead to blindness. CHM is X-linked disorder that is inherited in a dominant pattern according to OMIM database (OMIM 303100). There is a 50% chance for the CHM gene to be passed from a parent onto an offspring.

Choroideremia is caused by loss of function in CHM gene that produces Rab escort Protein 1 (REP1) which attaches to Rab proteins in the cells and directs them to the lipid membrane of various organelles [7-9]. Rab escort play a significant role in intracellular trafficking and allow nutrients to pass across cells. In order to keep the biochemical pathways of vision operating while our eyes are open the above procedure is necessary. Mutations in the CHM gene lead either to an absence of REP-1 protein or the production of a protein that is not fully functional [1-3,7,10-12]. Premature cellular apoptosis is the result of the loss of function in REP-1 protein since the binding of Rab proteins to the organelle membranes is prevented.

The couple, a woman aged 32 and a man aged 36, inquired genetic counseling for Choroideremia at our clinic due to male’s family history. According to their family history, the husband’s mother suffered from mere blindness and the older brother suffers from total blindness. His mother and brother attended an ophthalmology clinic and Choroideremia was suggested as a possible cause but unfortunately no genetic testing was carried out. Apparently, the CHM mutation is inherited to both brothers from their mother but due to the different progression patterns of the disorder even in the same family the husband does not yet experience all symptoms. He suffers from night blindness.

Before visiting our clinic, they were infertile for 40 months and the woman also suffered from endometriosis. After laparoscopic surgery, they tried to conceive with Intrauterine Insemination 3 times, all resulted negative. When they visited our clinic PGT was recommended after genetic testing of the husband for CHM mutation. The genetic testing came positive about c.1125 dup (p.Pro376Serfs*42). This mutation causes premature termination codon in the CHM gene and is probably the cause of Choroideremia. The whole PGT procedure was explained to the couple and they signed an informed consent (Figure 1). 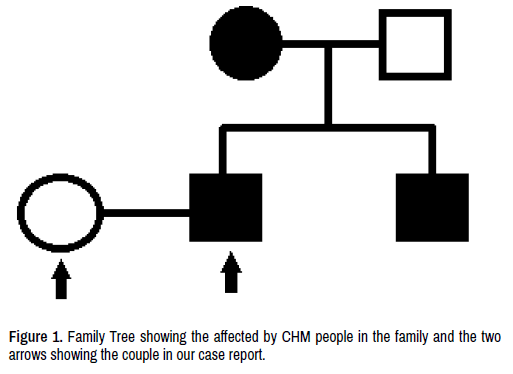 Figure 1. Family Tree showing the affected by CHM people in the family and the two arrows showing the couple in our case report.

Regarding the IVF cycle, after ovarian stimulation using Long Protocol with gonadotrophin-releasing hormone agonist and recombinant follicle stimulant hormone for 10 days, 28 oocytes were retrieved. 18 oocytes were mature out of the 28 and 14 of them were normally fertilized (2pn) with ICSI. Finally, 12 embryos were vitrified on day-2 due to progesterone rise. Due to financial reason the couple decided to follow Preimplantation Genetic Testing for Aneuploidies (PGT-A) that also shows the sex of the embryo. In Greece sex selection is forbidden by the Law but is accepted in case of serious X-linked genetic disorders.

Two months later, eight embryos were thawed on Day 2 and were biopsied the next day on Day 3. Cleavage Stage Biopsy technique was used. Vitrification and Thawing of the embryos on Day 2, is preferred due to the invasive nature of the biopsy technique. We prefer not to biopsy the embryos the same day as Thawing but to give them more time to relapse after Vitrification before Biopsy. One blastomere from each embryo was aspirated and sent for genetic testing. During the first PGT after array CGH analysis, the Preimplantation Genetic Testing for Aneuploidies showed four aneuploid embryos and four euploid embryos. Out of the normal embryos, two of them exhibit a normal male sex genomic pattern and were transferred on day 5, blastocyst stage. After 10 days the hCG result was unfortunately negative.

Two months later another Thawing and PGT-A cycle was performed and the analysis showed a chromosomally normal female embryo, an aneuploid embryo whereas the analysis of an embryo was not possible. So, the embryotransfer was cancelled and the couple was consulted to start a new ICSI cycle.

After five months they decided to start a new ICSI/PGT cycle. Antagonist protocol was used for ovarian stimulation and on the day of the oocyte retrieval 16 oocytes were collected. 12 oocytes were fertilized with ICSI out of the 13 mature oocytes and 12 embryos were vitrified at the cleavage stage (day-2). On the Thawing cycle some months later, we decided to thaw only 6 embryos. Four embryos were suitable (>6 cells) for Biopsy on day-3 and four blastomeres were successfully removed. At this point PGT-M (Preimplantation Genetic Testing for Monogenetic Disease) was performed specifically for the mutation and not PGT-A/a-CGH. The preimplantation analysis showed three embryos where the variant (c.1125dup (p.Pro376Serfs*42)) was not detected. The analysis was not possible for one embryo.

Two embryos were transferred on day 5, while one was re-vitrified. Pregnancy test was positive and twin pregnancy was identified at 7 weeks. Unfortunately, at twelve weeks vaginal bleeding was noticed and both embryos showed no heart activity. Induced abortion was performed and tissue from both sacs was sent for karyotype analysis. Only one sample was suitable for embryonic cells culture and that was detected with trisomy 18.

Some months later the normal for the mutation re-vitrified blastocyst was thawed and transferred but the result was negative [26-34].

One month later the rest six embryos were thawed, four were suitable for biopsy and after PGT-A/CGH all four were aneuploid, and therefore no embryotransfer occurred. At this point they preferred PGT-A instead of PGT-M for financial reasons.

Two months later they decided to start a new PGT cycle performing day 5 Biopsy. At this point we had just started practicing Trophectoderm Biopsy in our Lab. 21 oocytes were retrieved after Short Antagonist Protocol, 20 were fertilized and 4 of them vitrified on 2nd culture day. The rest of them were cultured until Blastocyst stage. Trophectoderm Biopsy was performed in 6 of the embryos that reached Blastocyst Stage and were immediately vitrified one by one waiting for results. Sex selection was performed for six embryos at the blastocyst stage by using Polymerase Chain Reaction (PCR). Three of the embryos showed male sex genomic pattern. For these three male embryos Preimplantation Genetic Testing was performed and the analysis showed that one embryo was aneuploid whereas two embryos were euploid and their transfer is recommended.

On the next months a FRET cycle started and the two normal blastocysts were thawed and transferred. Ten days later the hCG test was positive. Preimplantation Genetic Testing (PGT-A) was performed by using two different analysis methods of aCGH to detect chromosomally normal embryos.

Preimplantation Genetic Testing (PGT) analysis was performed, for the detection of the father’s variant (c.1125dup (p.Pro376Serfs*42)), by amplifying the region of CHM gene containing the above variant using the PCR method (Polymerase Chain Reaction) and Sanger sequencing (Figure 2) [35-41]. On the first ICSI cycle of this couple that PGT-A/aCGH was performed as mentioned the results proved that only 2 embryos were euploid boys and were transferred on day 5, at the blastocyst stage, but the result was negative. In the next attempt not even one embryo was euploid so the embryotransfer was cancelled and a new ICSI cycle initiated that resulted in a pregnancy of twins that were later aborted. At this point the embryos were examined only for the CHM mutation with PGT-M after Day 3 biopsy. The embryos were not checked for aneuploidy and later when the embryos were tested after induced abortion due to no signs of heartbeat, the result showed trisomy 18. This outcome and the PGT-A results from the previous cycle show clearly that there is also a high aneuploidy rate in the embryos retrieved from this couple. Consequently, the problem for this couple is not only Choroideremia but additionally high aneuploidy rate (Tables 1 and 2) [42-47].

This is a report about c.1125dup (p.Pro376Serfs*42) mutation that causes Choroideremia for which the husband came positive. This particular mutation causes a premature termination codon in the CHM gene as mentioned above.

A great deal of genetic diseases has been avoided since Preimplantation Genetic Testing was first implemented because only healthy embryos were selected for embryotransfer [48]. Nowadays, PGT for genetic testing is considered a routine procedure for every IVF clinic and an important alternative to prenatal diagnosis for several diseases such as beta-Thalassemia, Hemophilia A, Cystic Fibrosis, Duchenne's muscular dystrophy.

In our case specifically, the couple apart from being infertile was also carrier (the male) of Choroideremia, a rare genetic disease that causes blindness in boys. As mentioned above CHM is X-linked disorder. Therefore the couple was genetically counseled to have either Preimplantation Genetic Testing (PGT-M) for CHM (to exclude embryos being carriers of the disease) or Preimplantation Genetic Testing (PGT-A) with CGH array to test all 23 chromosomes for euploidy and thus to transfer only male embryos which would be unaffected for the mutation since the origin of the X chromosome was maternal.

In cases like this, where X-linked disease is to be avoided there are two options, either sex selection with PGT-A/a-CGH, or PGT-M specifically for the disease-causing mutation. The first approach ensures euploid embryos that do not carry or suffer the disease. The second approach that is more direct ensures an embryo that does not carry the mutated gene and consequently does not suffer from the disease. Unfortunately, PGT-M does not provide results regarding aneuploidy. From our experience with this couple that is also infertile and a high aneuploidy rate is detected, PGT-A/a-CGH for sex selection was the best option.

Before every PGT cycle pre-clinical testing and counselling work is necessary for the mutation to be detected, both partners should be tested for the best approach to be followed. In conclusion, a successful protocol for X-linked Choroideremia syndrome was developed, resulting in two clinical pregnancies. The first pregnancy of two healthy for the mutation-causing disease babies was terminated. Later a pregnancy with a healthy for CHM and euploid embryo followed, resulting in a live birth. In extremely rare conditions like this, a step by step strategy is the gold standard for couples at risk where the disease-causing mutation is known.

In conlcusion, the biopsies that followed were tested with a-CGH not only for the specific mutation that causes CHM but also for euploidy while selecting healthy for the mutation-causing the disorder boys. After the last trial that a PGT-A/a-CGH was performed on day 5 embryos (Trophectoderm Biopsy) the two healthy embryos resulted in a healthy clinical pregnancy and live birth of healthy baby boy.