Leptomeningeal dissemination (LM) is a major complication of a systemic cancer. In this paper, we will present a rare case of LM as the first presenting feature of an unknown primary. The patient had a good response to systemic corticosteroids for a week but, surprisingly, after investigation, the primary tumor was suspected to be a gastric tumor. Sadly, the patient died a few days later. In a literature search, it was hard to find similar cases, and the suggested protocols are very vague about LM from an unknown tumor. This case demonstrates that LM can be the first presentation of a systemic tumor, raising questions on treatment with corticosteroids.

Treatment with dexamethasone gave a good cognitive improvement for a week. The rapid progression, high level of CEA and CA-19-9 and the presence of poorly differentiated Adenocarcinoma brought us to a conclusion that the tumor was probably a gastric tumor. LM is a devastating complication. It is hard to recognize and treatment is usually futile [3,4]. It is reported in 5-10% of all patients with metastatic cancer [4].

Our case shows an uncommon presentation of LM as the first presenting syndrome of a systemic disease. A literature survey revealed only 14 similar cases, only seven of which had a suspected primary tumor (Table 1). The first presentation of solid tumors is rarely LM, and one should suspect a gastrointestinal tumor as 57% (4/7) of the cases with suspected primary are from that origin. Moreover, there is evidence that gastrointestinal tumors can manifest to the brain without other clinical features [5]. Another study showed that only 14 (9%) of 187 patients with solid tumors and six (16%) with hematopoietic tumors were considered free of disease prior to their LM diagnosis [6].

The surprising response of our patient to dexamethasone is not clear. Probably, the effect of the dexamethasone on the brain edema brought about such a response, in spite of it not being a standard of care [7]. Due to this response, and scarce literature, the decision whether or not to give systemic corticosteroids needs to be taken according to the clinical situation in such rare cases (Table 1) [8-14].

A previously healthy 67-year old man gradually developed a decline in his general condition and cognition over a period of one month. He had three admissions to the Emergency Department after recurrent falls. Computed tomography angiography (CTA) of the chest and abdomen demonstrated lytic lesions in the cervical vertebra, old fractures in the ribs, and the patient was discharged for ambulatory Investigation.

Due to severe confusion, we performed head CT that reveled large ventricles, hypotensive areas around the lateral ventricles, lacunar strokes in the basal ganglia bilaterally and lytic lesions in the cervical vertebra (Figures 1A and 1B). Lumbar puncture (LP) yielded CSF in brown-yellow color, elevated opening pressure (150 mm H2O), leukocytosis (207 cells/mm3, 60% neutrophils), glucose 123 mg/dL, and protein 234 mg/dL. Pathological examination was positive for malignant cells, consistent with adenocarcinoma (Figures 2A and 2B). 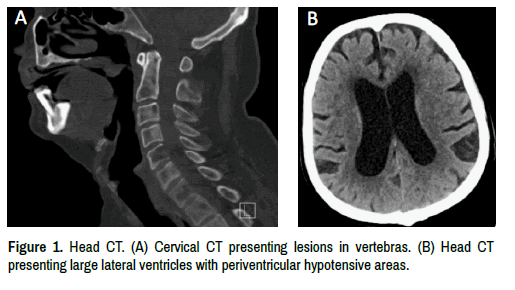 The patient was rapidly deteriorating and became nearly unconscious. He was then given a single dose of dexamethasone 20mg IV and after about 12 hours he was fully awakened from his comatose state. He was communicative again, talking with his family and caregivers. He was started on high dose dexamethasone daily.

Still, suspecting a myeloproliferative disease because of the rapid and unexpected response to steroids, a bone marrow biopsy was performed that showed poorly differentiated carcinoma (Figures 3A-3C). Tumor cells immunostaining was positive for PAN-Keratin, MNF-116 and CK-20 (Figures 3D and 3E). Immunostaining was negative for CK-7 (Figure 3F), CDX-2, SATB-2, GATA-3, CK5/6, P-40, Napsin A, TTF-1, S-100 protein, HMB-45, Mart-1, CD-3 and CD-20. Tumor markers were high for CA 19.9 (138.57 ng/ ml) and for CEA (63.58 ng/ml). Head Magnetic Resonance Imaging (MRI) scan revealed (Figure 4) hydrocephalus of the lateral ventricles and third ventricle, periventricular lesions that presented also in the sub-cortical white matter and deeper bilaterally. MRI with gadolinium injection showed enhancement in the sulcus of the cerebellum bilaterally and intra-axial in the right corona radiate. Furthermore, many lesions in the occipital bone and in the cervical vertebras were observed. Intrathecal methotrexate 12 mgs were administered twice and the patient seemed to respond to that initially. Later on, he developed neutropenia. Considering the fast and devastating clinical course and the diagnosis of metastatic cancer of unknown origin, it was decided to administer systemic chemotherapy with carboplatin AUC 5 and paclitaxel 175 mg/m2 in spite of the poor ECOG status which was about 4 [2]. Later, he received Nupogen (300 mg S/C). The patient was found dead in his bad three days later. A post mortem was not done because of family decision. The total clinical course was about 50 days.

Early diagnosis of LM is a major key for the rapid initiation of chemotherapy and/or radiation therapy. This case demonstrates that solid tumors may manifest with LM as the first symptom of a systemic disease. In cases where there is a reliable serum tumor marker, cognitive decline in the absence of systemic disease may support an investigation for LM. Management of these patients can include systemic corticosteroids that can be helpful, depending on their clinical situation. Furthermore, this case reveals our lack of knowledge of LM and encourages further research in this field.

Our institution does not require ethical approval for reporting individual cases or case series.

Verbal informed consent was obtained from the patient for their anonymized information to be published in this article.

This research received no specific grant from any funding agency in the public, commercial, or not-for-profit sectors.

The Authors declares that there is no conflict of interest.