Dog Bite on the Thigh Region of Village Chicken Hen: A Case Report

Dog Bite on the Thigh Region of Village Chicken Hen: A Case Report

Background: Village chickens are mostly reared under the extensive management system; they are left to scavenge freely for food and other needs from the surrounding which predisposes them to several vices including bites from predators such as dogs.

Presentation of case: An adult village chicken hen was presented to the University of Maiduguri Veterinary Teaching Hospital (Poultry clinic), on an emergency basis, patient was traumatized by an aggressive dog. The hen had extensive and multiple lesions on the left thigh extending to the hips, laceration of the skin connecting the thigh to the abdomen, exposing the peritoneum, and flapped skin involved the outer left thigh region and inguinal region. The case was managed as an emergency surgery by suturing of the lesion, accompanied by antibiotic medication, tetanus injections and anti-rabies vaccination.

Discussion: Injuries from dog bites can be of several severities depending on the region of the body involved. The treatment of choice for injuries sustained from dog bites are usually achieved by means of direct suture and grafting of flaps which depends on the nature of wound and the surgeon’s decision. This may be followed with antibiotic and anti-inflammatory therapy.

Conclusion: This case shows a case of a village chicken hen victim of dog bite, with lesions limited to the thigh, the hips and laceration of the skin connecting the thigh to the abdomen. The patient was followed up for a month, the prognosis was good, and the lesions showed good wound healing without any post-surgical complications.

Several studies have revealed that animal bites are wound, usually puncture or laceration, caused by the teeth [1,2]. The majority of animal bites are caused by dogs, reptiles (lizards), snakes, cats, bats, humans and non-human primates such as monkeys [3-11]. Some researchers have suggested that dog bites account for tens of millions of injuries annually [2,12]. Bites from dogs especially the stray dogs in Nigeria are relatively common which makes dog bite an important public health issue in the country [13]. Dog bite usually results in a break in the skin but also includes contusions from the excessive pressure on body tissue from the bite [1]. In many developing countries including Nigeria, dogs may bite whether being provoked or not, especially where they are not familiar with the environment.

The public health problem of a bite from a dog, no matter how minor is the trauma inflicted upon tissue might lead to severe blood loss especially where major blood vessels are damaged. Moreover, bite from infected dogs may enhance zoonotic disease transmission such as Rabies as well as source of entry of pyogenic organisms including Clostridium tetani that causes tetanus [13,14]. Although, not all dog bites result in rabies, however, in Africa and most developing countries where there are preponderance of unvaccinated dogs, every dog bite should be assessed for risk of rabies infection. This is because the pet dogs may have come in contact with a stray dog carrying rabies virus in the recent past [13]. Situations in which dog bites occur include dog fighting, mistreatment, trained dogs acting as guard or military animals, provoked or unprovoked.

All dog breeds can inflict a bite [15]. Breed is not an accurate predictor of whether or not a dog will bite. Dog bites can lead to disfigurement, functional disability, and infectious complications, particularly if they are left untreated or treatment is delayed [16]. Therefore, the treatment of choice for injuries from dog bites includes the suture of the lesion, accompanied by antibiotic therapy and tetanus and anti-rabies vaccination [17,18]. The risk of a serious infection can be reduced by cleaning the wound and getting appropriate health care treatment. Local animal control agencies or police are sometimes able to capture the animal and determine whether or not it is infected with rabies or other zoonotic disease of veterinary and public health importance.

In most developing countries of Africa, the rural poultry production system contributes absolutely to the livelihood of the rural families in providing high quality animal protein, create employment and income [19,20]. In Africa village poultry production systems are mainly based on scavenging indigenous chickens found in almost all households in the rural areas. They are characteristically reared under the extensive management system which exposes them to several agents including predation [21,22]. Next to infectious diseases, predators are considered as one of the major constraints to successful village chicken production in developing countries including Nigeria [20,23]. This study reported a case of dog bite on an adult village chicken when and how the case was humanely handled to save the life of the patient at the University of Maiduguri Veterinary Teaching Hospital, Maiduguri, Borno State, Nigeria.

An adult village chicken hen mother of eleven chicks with grey to blackish feather was presented to the Poultry unit of the University of Maiduguri Veterinary Teaching Hospital, on an emergency and urgent basis, the owner reported that the hen was managed to be rescued from a domestic dog aggression, the hen was struggling to free itself from the mouth grab of the dog while the dog uses its claws and teeth to traumatizes the victim.

Documented investigation revealed the number of birds in the flock to be 34 (consisting of 6 hens; 4 cockerels and 24 chicks) reared under extensive management system, and the weight of the patient is 1.4 g using a weighing balance.

The hen have sustained extensive lesions on the left thigh which extended to the region of the hips and the tarsus exposing the ligament and muscle of the thigh, trauma with laceration and loss of substance, tearing the shin widely open, the flapped skin involved the outer left thigh region and inguinal region. Narrow sharp canine teeth puncture on the medial aspect of the femoral muscles was seen. Laceration of the skin connecting the thigh to the abdomen, exposing the peritoneum which protected organs in the cavity is seen. There was no dislocation of joints or bone fracture, however, the patient display limp gait evidence of pain from the injuries sustained from the dog’s attack (Figures 1-4). 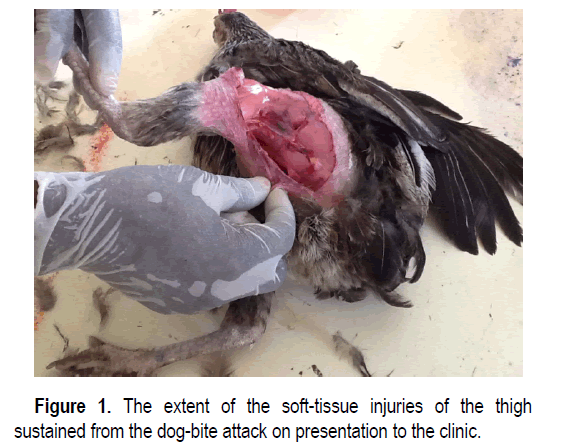 Figure 1. The extent of the soft-tissue injuries of the thigh sustained from the dog-bite attack on presentation to the clinic. 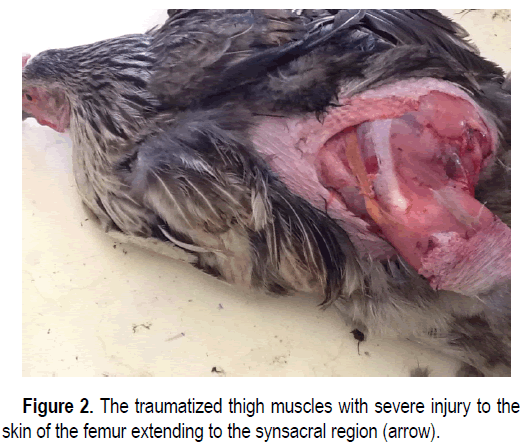 Figure 2. The traumatized thigh muscles with severe injury to the skin of the femur extending to the synsacral region (arrow). 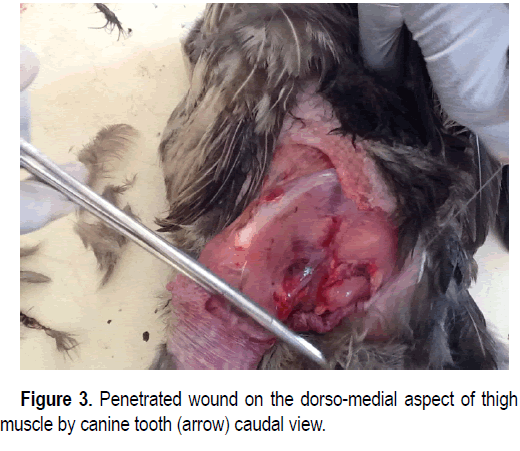 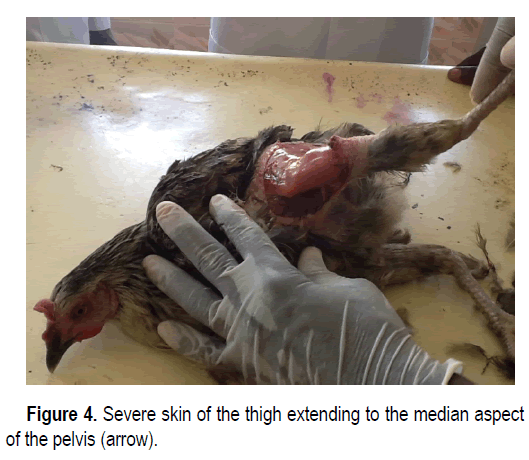 Figure 4. Severe skin of the thigh extending to the median aspect of the pelvis (arrow).

Managing the case was done according to standard procedures with little modification as follows: examination and evaluation of lesions and wounds sustained by the patient, trimming of the feathers around the wound to provide clear view of wound and cleaning the surfaces of wounds using mild disinfectant (Septol)® so as to reduce microbial contaminations.

Patient case was initially evaluated and documented by the poultry clinician and referred to the surgery unit for surgical intervention. The surgical procedure was performed under local infiltration of 2% Lidnocaine (Zarlido®) with adrenaline inverted L-block (total 1.5 ml), cleaning of the surgical area and irrigation with 0.9% saline solution, stabilization of wound edges and cauterization of the surgical area with cicatrin® powder. Then, skin suturing was carried out by suturing the wounds in layers with chromic catgut 2.0, followed by pressure dressing. For the muscles: Chromic catgut: size 2.0, Simple continuous suture pattern. For the sin: chromic catgut size 2.0, Horizontal mattress suture pattern; Ford interlocking at the pelvic joint region. Close control visits were programmed (Figures 5-8). 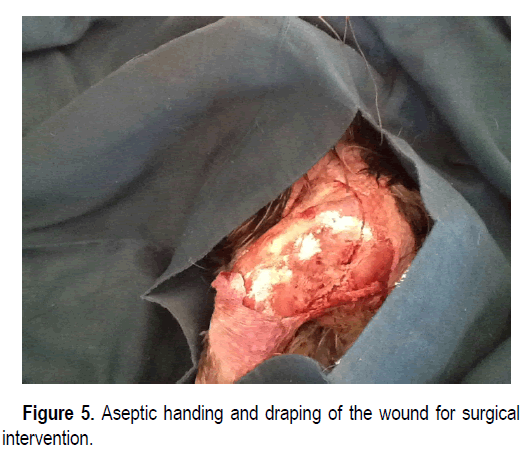 Figure 5. Aseptic handing and draping of the wound for surgical intervention. 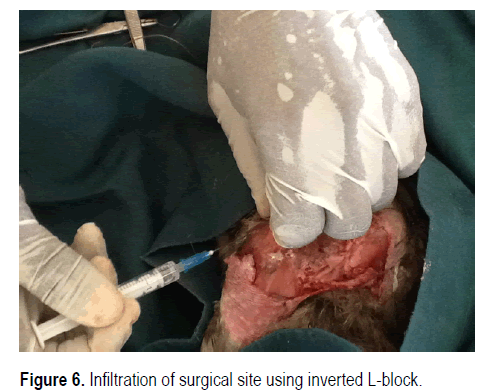 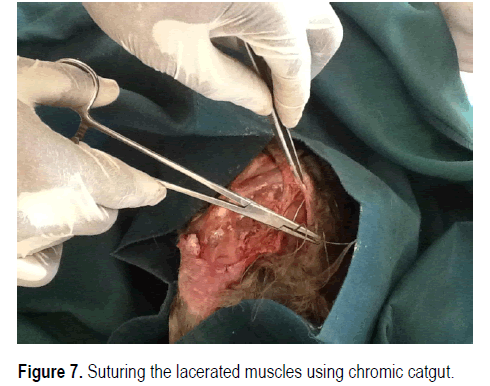 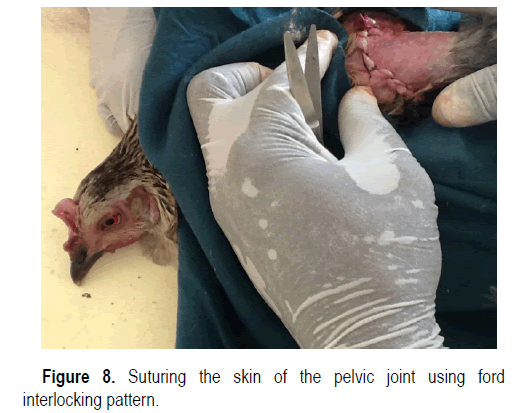 After the emergency surgery performed on the hen to suture all the lacerations sustained from the dog bite, the patient was watched closely for any abnormal behavioral changes probably consistence with those of rabies. Clinical investigations did not reveal obvious signs of rabies in the dog and chicken during and after 14 days of quarantine.

The owner of the chicken was advised to separate dog’s pen from that of the chickens to prevent future predation, and was instructed to represent the patient for the veterinary hospital for investigation when he noticed any stereotypic behaviors from the victim or dog. More over to register his birds with veterinary hospital to acquire prompt veterinarians’ guidance on livestock husbandry system and other precautionary measures in their management (Figures 9- 12). 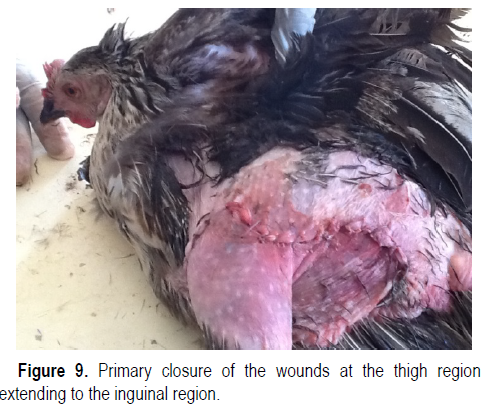 Figure 9. Primary closure of the wounds at the thigh region extending to the inguinal region. 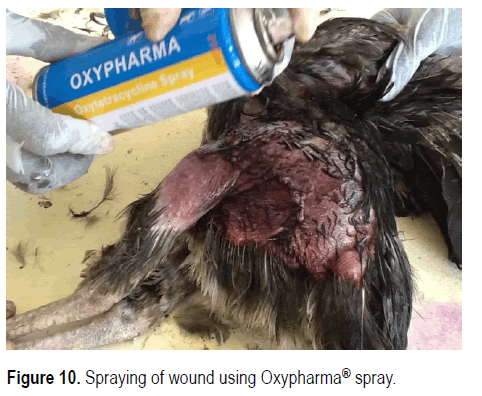 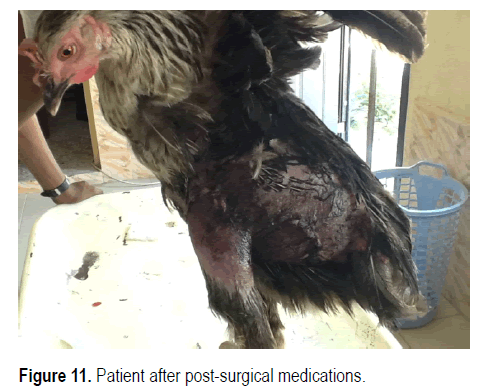 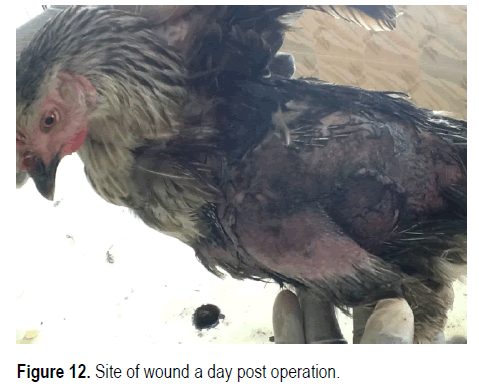 The patient was released to its owner after completion of postsurgical medications; the wound healed smoothly, there was evidence of positive response to treatments and no post-surgical complication. Patient fully recovered after six days and was reunited with chicks. It was noted that the client stick to advice on cleanliness and keeping dog away from the poultry pens (Figures 13 and 14). 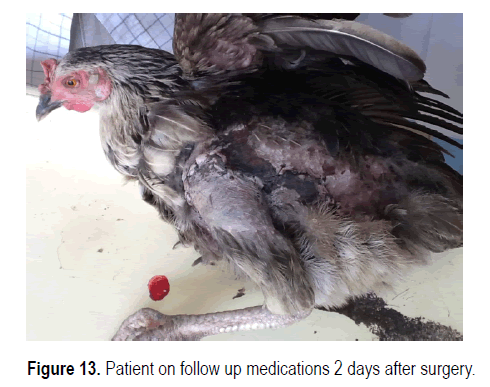 Figure 13. Patient on follow up medications 2 days after surgery. 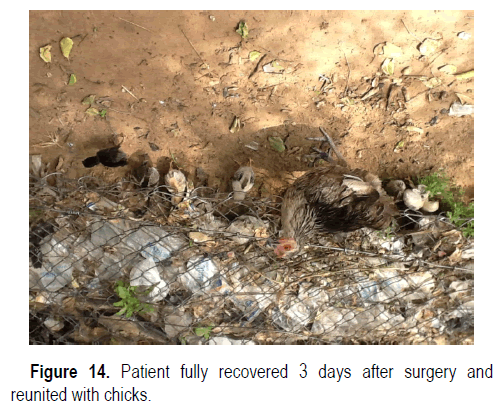 Animal bites are an important cause of mortality throughout the world and present a major public health problem in Nigeria [13,14]. This case study showed that the traumatized muscle was a result of dog bites, this accident resulted from the scavenging nature of village chickens which in most cases predisposes them to disease agents, automobile accidents, predators and theft. The surgical procedures performed to suture the torn muscles were considered successful as the wounds healed in few days without any post-surgical complication. This success was attributed to the ideal surgical procedure employed as well as the maintenance of strict septic free environment during the surgery.

Studies conducted in Nigeria on dog bites were carried out on humans and ruminants that are usually considered to be in high risk of contracting rabies from an infected dog [13]. However, it is worth knowing that rabies has previously being reported in scavenging chickens as a result of bite from a rabid dog in India [24,25]. Although, the dog involved in this study have been subjected to investigation for rabies and the results had shown that it was rabies free. This was probably as a result of the dog been vaccinated routinely against rabies, moreover, the bitten victim (village chicken) in the study have not showed any clinical sign consistent with those of rabies during and after the period of its quarantine. But transmission of rabies from dogs to chickens and other livestock should never be taking for granted since there are a lot of stray dog roaming the street in Nigeria and rabies is considered endemic in the country [26-30]. It was therefore suggested that that the mother hen to be united with her chicks to prevent further exposure to predators. The antibiotic used as post-surgical medication was intended to treat the patient against any secondary bacterial infections in the environment to with the patient may get exposed which concurs the study of Agrawal [18].

This case study shows a case of a village chicken hen patient victim of dog bite, with lesions limited to the region of the thigh. Surgical suturing of the traumatized region was conducted. The patient was followed up for a month and wound showed good healing process without any post-surgical complications. The chickens did not demonstrate any clinical signs consistent with those of rabies.

It was recommended that post-exposure treatment of animal bites should be reported to the appropriate authorities without delay. There is need to create a public awareness campaign on the public health significance of dog bite. There is also need to educate the community on dog ownership, safety around other livestock and prompt management of dog bites. 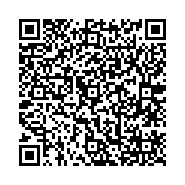