Importance of Medico-Legal Autopsy or Clinical Autopsy In forensic science

In many natural and unnatural death cases, where the cause of death is not certain whether the death was accidental, homicidal, or suicidal in nature then there we
need Medical examination i.e. Postmortem examination which become necessary during the crime scene investigation to find the cause and manner of death in
cases where victim body was found dead. To perform the medico-legal autopsy the medical examiner not need the permission of the deceased family or relatives.
Manner and cause of death can be described by the various examination findings and investigations results performed under the medical officer.

This present study was performed on cases of death due to compression of neck by any form like ligature material due to hanging, strangulation etc brought for
postmortem examination at mortuary of Government Medical College, Kota, Rajasthan, India during period of 1st January 2019 to 31st December 2019. A total of
1296 postmortem was conducted, out of which 152 were of compression of neck by means of any form. Out of them 143 cases were of hanging, 1 was ligature
strangulation, 1 was manual strangulation, 1 was of hanging with antemortem injury over body and 6 were under query as sign of asphyxia present over body
but ligature mark was not clearly visible. We observed that dribbling of saliva present in most cases of hanging but not seen in ligature and manual strangulation
cases. In query cases we had taken sample of cello tape which was taken on the paper from around the neck for presence of fiber & foreign bodies and its cross
match with ligature material. The final cause of death was given after receiving of FSL reports.

Objective: In the case of a newly born infant, either stillborn or found dead, the state of the lungs is of particular forensic
interest. The aim of this study was to determine whether lungs are adequate for pathological comment about stillbirth or
live birth of infant.

The Comprehensive Analysis of Traumatic Rib Fractures and their Complications: A Post Mortem Study

Introduction: Rib fractures are the most common injury sustained following blunt chest trauma, accounting for more
than half of thoracic injuries from non-penetrating trauma. Approximately 10% of all patients admitted after blunt
chest trauma have one or more rib fractures. In United States they account for 10% of traumatic injuries and 14% of
all chest wall injuries. The incidence of flail chest is 10% to 15% of severe chest traumas. Material and Methods: In this
retrospective study, fatal cases of thoracic trauma autopsied during the period 1st January 2009 to 31st December 2010
were analyzed at the Department of Forensic Medicine & Toxicology, Adichunchanagiri Institute of Medical Sciences,
Mandya District, and Karnataka, India. Results: In the present study, 31.3% of victims belong to the 3rd decade of life.
Women were less involved than men with ratio of 1: 1.5. The mortality rate was 20.18%. The victims in most of the cases
sustained non displaced rib fractures followed by displaced fractures. 5th rib fracture were seen in eight cases followed
by 4th and 6th ribs fracture were seen in seven cases.

Official technical and scientific recommendations on standard procedures and quality control in the field of testing of paternity do
not cover issues relating to methods of subjects’ identification in the processing of paternity investigations that are compulsory for
the individuals – parental testing ordered by courts. The aim of this paper is to explore the main issues posed to forensic laboratories
when collecting samples for court ordered paternity investigation and therefore contribute to the ongoing debate on social and ethical
implications of parental testing and open up new dimensions of this practice.

The present article examines in depth a practical case of murder of an 18-month-old minor perpetrated by her own parent (filicide). The singularity of the casuistry not only lies in the criminological impact of the murder itself, but also pivots on the mental state of the perpetrator and whose sentence (consult) -based on the Mental Health professionals of the public sector, as well as the Forensic Doctors and other circumstances surrounding the casuistry- not appreciate Modifying Circumstances Of Criminal Responsibility (MCCR) based on the existence of psychic alteration. On the other hand, the Experts (private) maintained their professional evaluation during the plenary session, according to which the offender presented a mental disorder based on a psychotic disorder (brief, acute and transitory), according to the clinical documentation on hand closest to the facts of the case and the testimony of the witnesses. With the majority of the article available, the article analyzes the behavior of the convicted party and compares it with the hypothesis of the defense experts, in relation to the lucid intervals that may be manifested by psychotic and/or schizophrenic disorders under the harmful influence of mental dysfunction (a circumstance which, the same Experts informed of in the actual plenary act).

Consequences of Child Abuse and Neglect

A unique case of the psychological profile of a child under 14 years of age is reported who, comorbidly affected by Attention Deficit Hyperactivity Disorder (ADHD) with borderline intellectual disorder (borderline) perpetrates the murder of another minor of the same age due to low tolerance to psycho-emotional frustration

A Case of Neonaticide with Homicidal Defenestration of the Minor

A case of notorious uniqueness of neonaticide is related, illustrating the psychological profile of a young mother who, at the same moment of breaking water and giving birth to a female baby, throws it into the void from the window of the bathroom of her home when he was only a few minutes old.

DNA fingerprinting, likewise called DNA composing, DNA profiling, hereditary fingerprinting, genotyping, or character testing, in hereditary qualities, strategy for detaching and distinguishing variable components inside the base-pair grouping of DNA deoxyribonucleic corrosive. The procedure was created in 1984 by British geneticist Alec Jeffrey's, after he saw that specific groupings of profoundly factor DNA known as minisatellites, which don't add to the elements of qualities, are rehashed inside qualities.

Selective Behavior of Rodents When Feeding On A Corpse: A Case Report

Post-mortem animal activity is an important factor to consider when investigating the death of outdoor corpses. Many predatory and scavenger
animals can attack human bodies and expose them to complete destruction, and the dead person's bones and possessions can be
spread around a large area because of animal involvement. This fact complicates the investigation both during the scene inspection and at the
autopsy. In this case report, we present a rare phenomenon in which during an animal attack on a human corpse all of the internal thoracic
organs were eaten except for one lung affected by lobar pneumonia. We report about rats that found refuge in the body of the deceased during
the relatively cold spring period, which acted as their hiding place in addition to the source of food. Such selective activity by rats has left
us a section of one organ in which we have found a major pathological finding, which may have had something to do with the cause of
death.

Cocaine-Induced Psychosis, Frustrated Suicide with a Firearm and Subsequent Conviction for Attempted Homicide

From the presentation and the clinical-legal analysis of the case, the following conclusions can be drawn: The hopelessness and anguish typical of major depressive disorders with severe symptoms are important in terms of the possibility of suicidal risk. A case of suicide by the combined use of massive cocaine ingestion and a firearm shot in the chest of the suicide is illustrated, having survived the impact of the firearm due to the mechanical and pathological action of the massive ingestion of the cocaine substance in the body in a chronic addictdependent subject.

Harakiri is a form of Japanese ritual suicide. A sharp instrument is used to inflict a wound to the abdomen, causing disembowelment and slow and painful death. The two cases of suicide by harakiri described in this article are the only cases that happened over a period of 20 years in the wider Rijeka area. One victim suffered from depression with psychotic episodes, whereas more detailed background information for the other victim wasn't available

Nanoparticles made out of Biodegradable Polymers

Cloning, the most common way of producing a hereditarily indistinguishable duplicate of a cell or an organic entity. Cloning happens regularly in nature for instance, when a cell imitates itself agamically with no hereditary modification or recombination. Prokaryotic creature’s organic entities coming up short on a phone core, for example, microorganisms make hereditarily indistinguishable copies of themselves utilizing paired parting or sprouting. In eukaryotic life forms living beings having a cell core like people, every one of the cells that go through mitosis, for example, skin cells and cells covering the gastrointestinal lot, are clones; the main special cases are gametes eggs and sperm, which go through meiosis and hereditary recombination.

The Investigation of Pathology

Pathology is the investigation of the circumstances and end results of sickness or injury. The word pathology likewise alludes to the investigation of infection as a general rule, fusing a wide scope of science research fields and clinical practices. In any case, when utilized with regards to current clinical therapy, the term is regularly utilized in a more thin style to allude to cycles

Phonological and Orthographic Adjustments between a Base Word

In semantics, morphology is the investigation of words, how they are shaped, and their relationship to different words in the equivalent language. It examines the design of words and portions of words like stems, root words, prefixes, and additions.

Post-mortems are performed to legitimate or clinical purposes

The expression "post-mortem" gets from the Ancient Greek α├Ī┬Į┬Éτοψ├Ä┬»α autopsia, "to see with one's own eyes", got from α├Ī┬Į┬Éτ├Å?ς (cars, "oneself") and ├Ī┬Į?ψις (opsis, "sight, view")."post-mortem" has been utilized since around the seventeenth century, it alludes to the assessment of inside the dead human body to find infections and reason for death.

The Vulnerabilities Related with Bloodstain Design Investigation are Colossal

Bloodstain Pattern Analysis (BPA) is the field of legal science that comprises of the investigation and examination of bloodstains at a known or associated crime location with the reason with making inferences about the nature, timing and different subtleties of the crime

Function of the Medical Examiner

The clinical analyst is an appointed official in some American jurisdictions who is prepared in pathology that explores passing’s that happen under uncommon or dubious conditions, to perform after death assessments, and in certain wards to start inquests 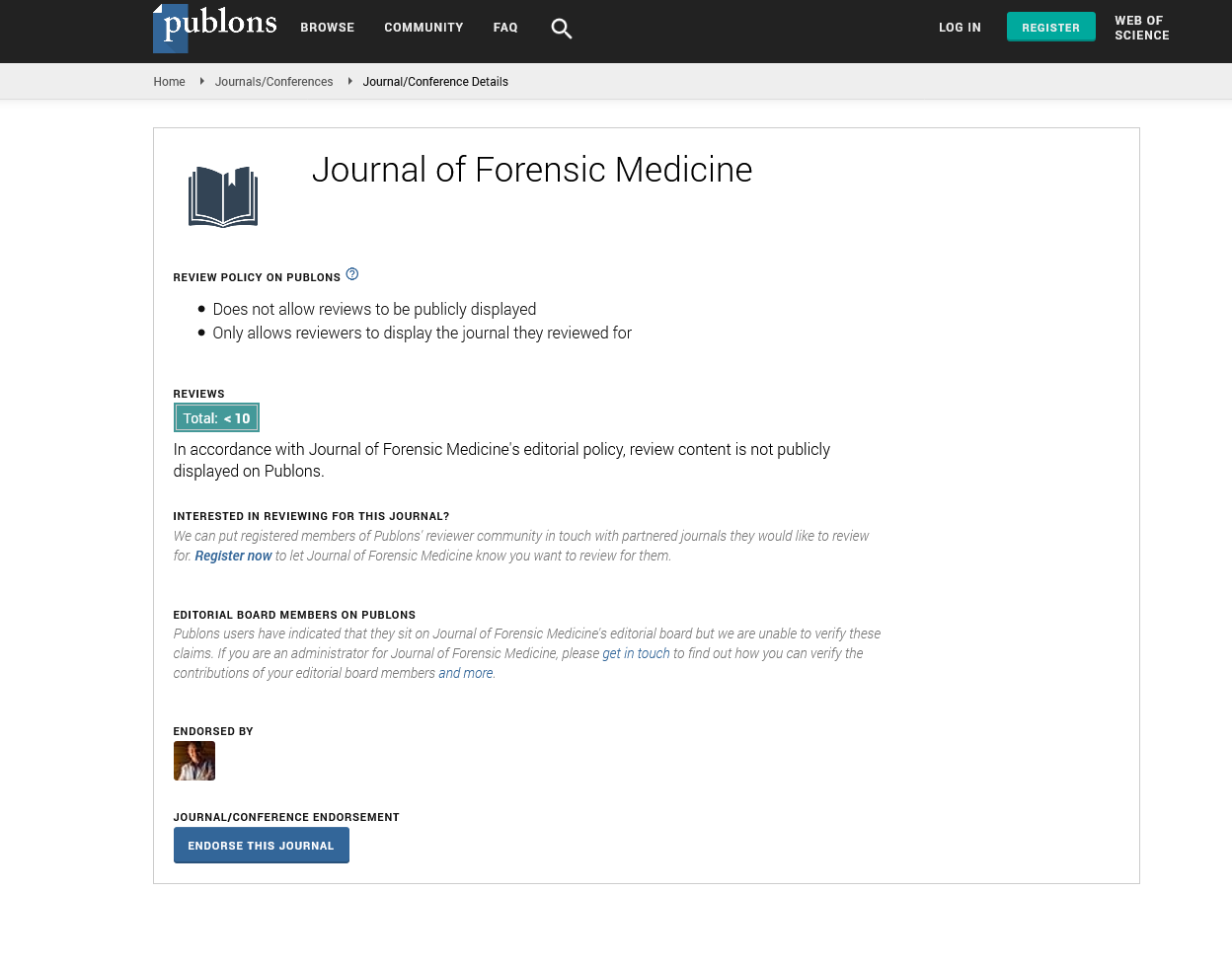