Metastatic Disease to the Pancreas from Squamous Cell Lung Cancer: A Case Report

Metastatic Disease to the Pancreas from Squamous Cell Lung Cancer: A Case Report


Received: 22-Feb-2021 Published: 15-Mar-2021
Citation: Bivolarski, Ivan. Metastatic Disease to the Pancreas from Squamous Cell Lung Cancer: a case report". Clin Case Rep 11 (2021): 1147
Copyright: © 2021 Bivolarski I. This is an open-access article distributed under the terms of the Creative Commons Attribution License, which permits unrestricted use, distribution, and reproduction in any medium, provided the original author and source are credited.

We present a one clinical case of patient with metastasis of squamous cell non–small-cell lung cancer in pancreas. A 49-year-old Caucasian male patient presented to our Medical Oncology department with obstructive jaundice and severe abdominal pain, after the last course of chemotharapy. Six months prior to presentation the patient had undergone right bronchoscopy, due to stage IV, moderate-grade squamous cell lung carcinoma. After the bronchoscopy, the patient receives chemotherapy and radiotherapy. Abdominal computed tomography on admission after the last course of chemotharpy, revealed lesion located at the head of the pancreas, causing biliary obstruction. The abdominal computer tomography reveals also lesion in left adrenal gland. Histological examination reveals and changes in grade of the histology from moderate in primary foci in lung to low-grade in metastasis in pancreas. Due to the severe pain in the abdomen and jaudice of the metastatic disease, surgical resection was proposed and the patient underwent pancreaticoduodenectomy. Histological examination of the resected specimen from pancreas confirmed a low-grade squamous cell carcinoma form the lung.

A 49 year-old Caucasian male patient, current smoker with a 35-pack year history, diagnosed in May 2019 after bronchoscopy with moderategrade squamous cell carcinoma of the lung and pulmonary contralateral lung metastases. After an X-ray examination was performed, osteolytic metastases was found of the right femur and of the right ischial spine were proved bone 24/4 mm. After discussing of his medical case, a decision made from multidisciplinary team to pass 6 courses of chemotherapy, osteomodulators and radiation. In May 2019, he started cytostatic chemotherapy with Cisplatin and Vinorelbine (1, 8 in 21 days). After the first course of chemotherapy, he started therapy with Zoledronic acid. In July, after 3 chemotherapy sessions with Cisplatin and Vinorelbine, the patient begins radiation with 6 MeV photons in the right thigh area for treatment of bone metastases with 20 Gray, completed with a realized total dose of 20 Gray and performed symptomatic therapy.

In August 2019, the patient continues with prescribed chemotherapy regimen with Cisplatin and Vinorelbine.

In September 2019 he started radiotherapy with 6 Mev photons in the left lung area with 40 Gray, as ended with a total realized dose of 40 Grays. In November 2019, immediately after the last chemotharapy the patient began to experience complaints of increased abdominal pain, black stools and a constant temperature of 37.7 degrees C. Abdominal ultrasound examination was performed with an established lesion of the pancreas measuring 42/29 mm and enlarged ductus choledochus-12 mm.

Abdominal computed tomography, revealed lesion located at the head of the pancreas with size of 25.4 mm, causing biliary obstruction (Figure 1). 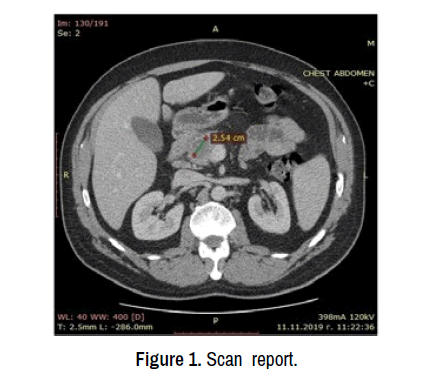 The abdominal ultrasound, established lesions in adrenal glands. After that a decision was made by a multidisciplinary team to initiate Pembrolizumab treatment (with PD-L1 expression>1%). It was conducted 1 course on treatment. Immediately after the first course of immunotherapy, the patient recieve complaints of very severe abdominal pain, black stools, general fatigue, yellowing and high fever. Low blood hemoglobin levels were detected from the blood picture.

He was consulted immediately with surgeon with decision for surgical intervention. Laparotomia was performed. Operationally was established a tumor formation in the pancreatic head region and thickening of his body with enlarged and intense gallbladder and dilated ductus choledochus. Infiltration of the duodenum from changes in the head of the pancreas was detected, also and dilatation of the stomach. As an accidental lesions in the terminal ileum was found 3 suspected metastatic tumors in the abdominal wall and mesenterium.

Adrenal histology has not been taken. No further follow-up for histology of adrenal gland were performed at that time. It was sent histological specimens from the pancreas for examination. The pathologic examination confirm of pulmonary histology squamous cell carcinoma, but with change grade of differentiation from moderate in primary foci in the lung to low grade found in metastasis in pancreas.

However, despite the efforts made with a picture of multiple organ failure and carcinoma intoxication, the patient passed away.

To date, several have been detected in the English-language literature clinical cases that describe the occurrence of such pathology. In the searches made in PubMed, only 7 cases were reported the findings as clinical case [3-8]. Metastasis to the pancreas and adrenal glands from squamous cell carcinoma of the lung is a severe manifestation of the disease.

Metastasis from a non-biliary and non-gastrointestinal tract cancer to the common bile duct is also rare and is an unusual presentation for lung cancer [9].

For example, squamous cell carcinomas in many cases have a tendency to locally invade the thoracic wall [10].

We cannot, however, to disagree with the opinion of Laurie Matt and Rajesh Sehgal, that the presence of pancreatic [8]. Eventualy adrenal glands, in our case, metastases is probably a much more common phenomenon, that deserves attention on the part of clinicians because it is detected at a late stage in the development of the disease and can dramatically impair the quality of life of patients. According Laurie Matt and Rajesh Sehgal the incidence of radiographically evident metastatic disease to the pancreas is relatively low [8]. Its early detection and recognition can add months to these patients and improve their overall condition.

Our patient was with metastatic disease to the pancreas and was present with abdominal pain, weight loss, acute pancreatitis, jaundice, or diabetes and hyperglycemia. This is common statement in such patients, but metastatic disease can be asymptmatic [14]. Asymptomatic disease makes the detection of pancreatic metastases a hardship [15-17].

No funding was received.

Availability of Data and Materials

Ethics Approval and Consent to Participate