The aim of this study was to evaluate the effectiveness of Modified hold-relax on stair ambulation in stroke patients.

In this study, 35 stroke patients were recruited based on the inclusion criteria. The the rapist performed Modified hold-relax for quadriceps i.e.4 repetitions in each session, 5 days a week for 4 weeks, total of 20 sessions. Quadriceps tightness wasassessed using Duncan-Ely’s test, the impact of stroke in individual’s health and life was analyzed using Stroke Impact Scale (SIS) and ability to ambulate the stairs efficiently was analyzed by Timed Up and Down Stairs test (TUDS) before and after the intervention.

Stroke is a non-traumatic, focal vascular-induced injury of the central nervous system (CNS) and leads to permanent damage in the form of cerebral infarction, intra cerebral hemorrhage (ICH) and/or subarachnoid hemorrhage (SAH) [1]. Stroke affects 15 million people worldwide every year and it is estimated that 5 million of these will die and a further five million will be left with a permanent disability. This makes stroke the second-leading cause of death worldwide [2].

A stroke is a sudden loss of brain function resulting from an interference with the blood supply to the central nervous system (CNS). Nearly 85% of all strokes are of ischemic origin, with most attributable to blockage of one or more cerebral artery by blood clots, with resulting reduction in cerebral perfusion. The remaining stroke cases are hemorrhagic, involving either intra cerebral or subarachnoid hemorrhage [3].

Clinically, a variety of focal deficits are possible, including changes in level of consciousness and impairments of sensory, motor, perceptual, cognitive, and language function [4]. Most common and widely recognized impairment caused by stroke is motor impairment which generally affects the control of movement of the face, arm and leg of one side of the body and affects 80% of patients to varying degrees. It is becoming very important to assess the effects of disease on patient function, independence and quality of life [5]. The severity of the lesion will determine the degree of the motor and cognitive involvement that produces hyper tonicity of the muscle of arm and leg which disrupt the balancing mechanism of proprioception feedback, voluntary motor control and ambulatory ability [6]. In patients with spasticity, passive mechanical properties of muscle are to some extent responsible for impaired gait patterns and enhanced passive joint resistance [7].

Limitations in mobility, lower levels of physical activity post-stroke, and an inability to negotiate stairs can restrict independence outside the home [8].

The ability to ascend and descend stairs is considered a key indicator of functional independence. Post stroke individuals with hemiparesis report difficulty in performing this activity, even one year after the episode [9]. Independent living requires physical mobility beyond walking. Stair negotiation is an important determinant of discharged destination and independence, overpassing walking speed as the single best predictor of community ambulation [8].

Stroke patients negotiate stairs with slower cadence, diminished lowerlimb extensor and hip abductor moments on the more affected side, and increased limb asymmetries even when using a handrail [11]. Unlike level walking, the ability to manage stairs is critically dependent upon the activity and strength of the knee extensors as these muscles produce considerable joint angular displacement which in turn translates the center of mass. High strength and aerobic demands of stair negotiation in stroke is likely a factor underlying its rating as the most difficult activity to perform following stroke rehabilitation, often leading to avoidance of stairs [8]. The knee extensors are important contributors to the work of stair negotiation with peak moment magnitudes approximately double those reported for walking. In conjunction with the plantar flexors, the knee extensors contribute substantially to the total support moment during weight acceptance and initial forward continuance in ascent and controlled lowering of the COM during descent. In descent, the extensors work eccentrically to decelerate the forward and downward movement of the COM and to prevent collapse, a crucial role in ensuring stability and safety [8]. Quadriceps muscle spindles act as proprioceptors used to coordinate movement, and diminished proprioception can lead to higher loading of the knee joint [12]. Quadriceps activity is most pronounced in ascent. Though extensor activity is slightly less in descent than ascent, healthy quadriceps muscles are necessary for proper performance of both activities. If an individual's quadriceps become weak, stability will decrease, and stairclimbing will become more difficult [13].

Duncan- Ely test is one of the clinical tools to assess rectus femoris spasticity [14]. It is performed by passively flexing the knee rapidly while the patient lies prone in a relaxed state. The test is considered positive if the patient simultaneously flexes their ipsilateral hip or if resistance is felt by the examiner during passive knee flexion. For positive tests, the knee flexion angle at which hip rise began is estimated and recorded [15].

PNF (Proprioceptive neuromuscular facilitation) stretching is a method of flexibility training that can reduce hyper tonus, allowing muscles to relax and lengthen. PNF stretching techniques are as follows: Contract Relax, Hold Relax, Rhythmic Initiation, Rhythmic Stabilization, Slow reversals, aternating isometrics and Alternating rhythmic stabilization. Hold Relax is used when the agonist is too weak to activate properly. The patients’ restricted muscle is stretched followed by an isometric contraction of the restricted muscle. After the allotted time the restricted muscle is passively moved to a position of greater stretch [16]. Modified hold relax is modified form of hold relax [17]. These exercises are designed to enhance the neuromuscular response of the proprioceptors. Reflex relaxation is the goal of hold-relax technique. Neurophysiological mechanisms underlying the effectiveness of PNF stretch procedures have consistently included autogenic inhibition via the Golgi tendon organ tension receptor and reciprocal inhibition through the muscle spindle [16].

Ethical approval was given. Following sample size calculation 35 subjects; 20 male and 15 female post-stroke individuals (mean age 57.63 ± 13.39) were recruited for the study. All the participants within the study gave their informed consent after the research purpose and procedures had been explained to them. These individuals all met the inclusion criterion of being diagnosed with is chemic stroke, Brunnstrom recovery stage of two, score of 24 points or higher of the Mini-Mental State Examination, the ability to walk for 6 minutes and positive Duncan Ely’s Test. The presence of musculoskeletal or other cardiovascular problems aside from known and controlled hypertension excluded an individual from the study.

Patient was comfortably positioned in side lying on the couch. Therapist, standing behind the patient, passively flexes the patients’ affected side knee until a slight stretch was felt and reported by the patient. Stretch was maintained for 15 seconds. Patient was then asked to perform isometric contraction of quadriceps for 10 seconds followed by relaxation for 10 seconds. Each session consisted of 4 repetitions of Modified Hold Relax, 5 days a week for 4 weeks which is total of 20 sessions.

The Statistical software namely SPSS 18.0, and R environment ver.3.2.2 were used for the analysis of the data, and Microsoft word and Excel have been used to generate graphs and tables.

• To assess the effectiveness of modified hold-relax technique on stair ambulation in stroke patients, which is analyzed by paired proportion test.

• To assess the effectiveness of pre and post-test of modified hold relax technique on stair ambulation in stroke patients, which is analyzed by Student t test (Two tailed, Dependent).

Table 4 and Figures 1-3 shows the evaluation of clinical outcome variables of baseline scores and post test scores of Duncan Ely's test, TUDS test and SIS. The evaluation of all variables was done by Student t test (Two tailed, Dependent) considering the p-value of <0.001 to be statistically significant. 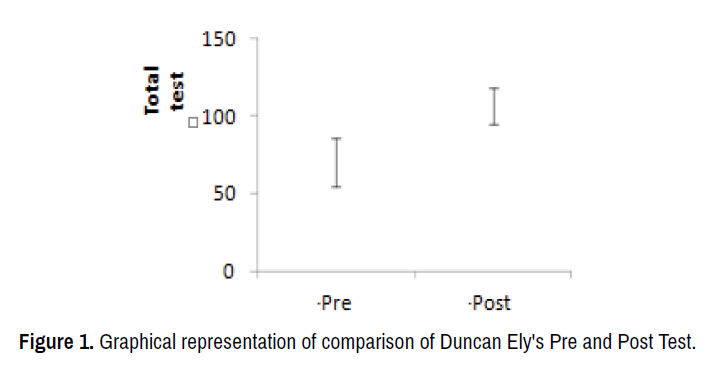 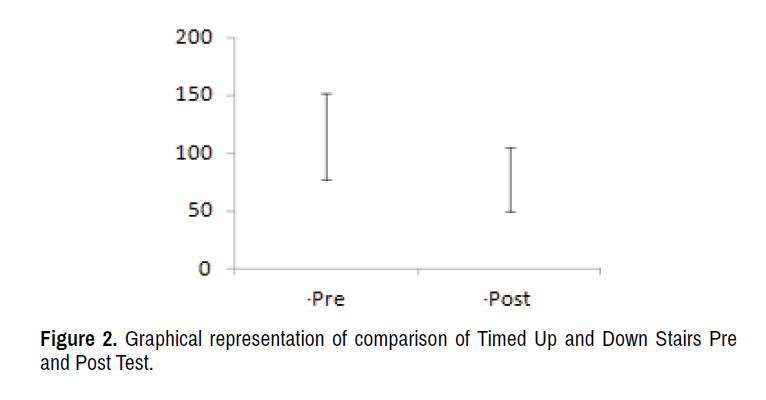 Figure 2. Graphical representation of comparison of Timed Up and Down Stairs Pre and Post Test.

Hence, these results depict that all the outcomes had shown significant improvement post intervention.

The purpose of the study was to analyze effectiveness of modified hold relax technique on improving stair ambulation in stroke patients.

A review given by Victoria et al. [16] stated that PNF stretching is superior to other stretching techniques. Modified hold-relax stretching improves flexibility through relaxation of the contractile component of the muscles. They have been found to be effective in a variety of conditions, such as in increasing the length of shortened muscle, strengthening weak muscles, increasing lymphatic or venous return to aid the drainage of fluid or blood, and increasing the joint range of motion (ROM) of a restricted joint as stated by Ali et al. [6].

The impact of Modified hold relax technique to improve stair ambulation in stroke patients was analyzed and clinical relevant outcome measures were chosen; Duncan Ely’s test used to assess rectus femoris spasticity, SIS used to evaluate how stroke has impacted the individual’s health and life and TUDS test used to potentially reflect improvements in the musculoskeletal and neuromuscular systems that contribute to mobility and balance.

A study by Spernoga et al. concluded that a sequence of 5 modified holdrelax stretches produced significantly increased hamstring flexibility that lasted 6 minutes after the stretching protocol ended [17]. In this study, the intervention was directed on Modified hold relax technique for quadriceps muscle and post test score shows a statistically significant improvement in Duncan Ely’s test, TUDS and SIS after 20 sessions.

One of the studies done by Harpreet et al. [18] suggested that modified hold relax had significantly higher results in increasing the static and dynamic hamstring flexibility as compared to static stretching, dynamic stretching and only warm up, a statistically significant improvement in Duncan Ely’s test was observed following the treatment.

Ridgway et al. [8] had stated that the knee extensors are important contributors to the work of stair negotiation. So, in this study modified hold relax technique was used for quadriceps. Subjects’ outcome variables like Duncan Ely’s test, TUDS and SIS showed significant improvement in the post test which shows that patients had a better motor function, functional mobility in stair ambulation with the help of Modified hold relax technique.

• No long term follow-up was carried out to assess the carryover effect after 4 weeks of the intervention.

• Some patients were apprehensive of the technique.

• Modified hold relax was used only for knee extensors and not for hip flexors and ankle dorsiflexors.

• Long term follow-up with larger population are warranted to see the effectiveness of the intervention and it might reveal higher statistical significance.

• Hip flexors and knee extensors strengthening exercise along with modified hold relax could be more beneficial.

This was a single group study which included 35 subjects, for the period of 12 months at Kempegowda Institute of Physiotherapy, Bangalore. The frequency of each session consisted of 4 repetitions of Modified Hold Relax, 5 days a week for 4 weeks i.e. 20 sessions.

The outcome measures used for pre and post intervention assessment were Duncan Ely's test, Timed Up and Down Stairs test and Stroke Impact Scale. Accordingly, the subjects were assessed on Day 1 and pretest score was recorded. Following the intervention post test score was recorded after 20 sessions in order to evaluate the effect of Modified Hold Relax on stair ambulation.

Following statistical analysis, the comparison within the group was analyzed using “student t test (two-tailed, dependent)”. There was significant improvement in Duncan Ely’s test, Timed Up and Down Stairs test and Stroke Impact Scale.

Thus, the results observed in our study concluded that Modified Hold Relax technique was effective in order to improve stair ambulation in stroke patients. 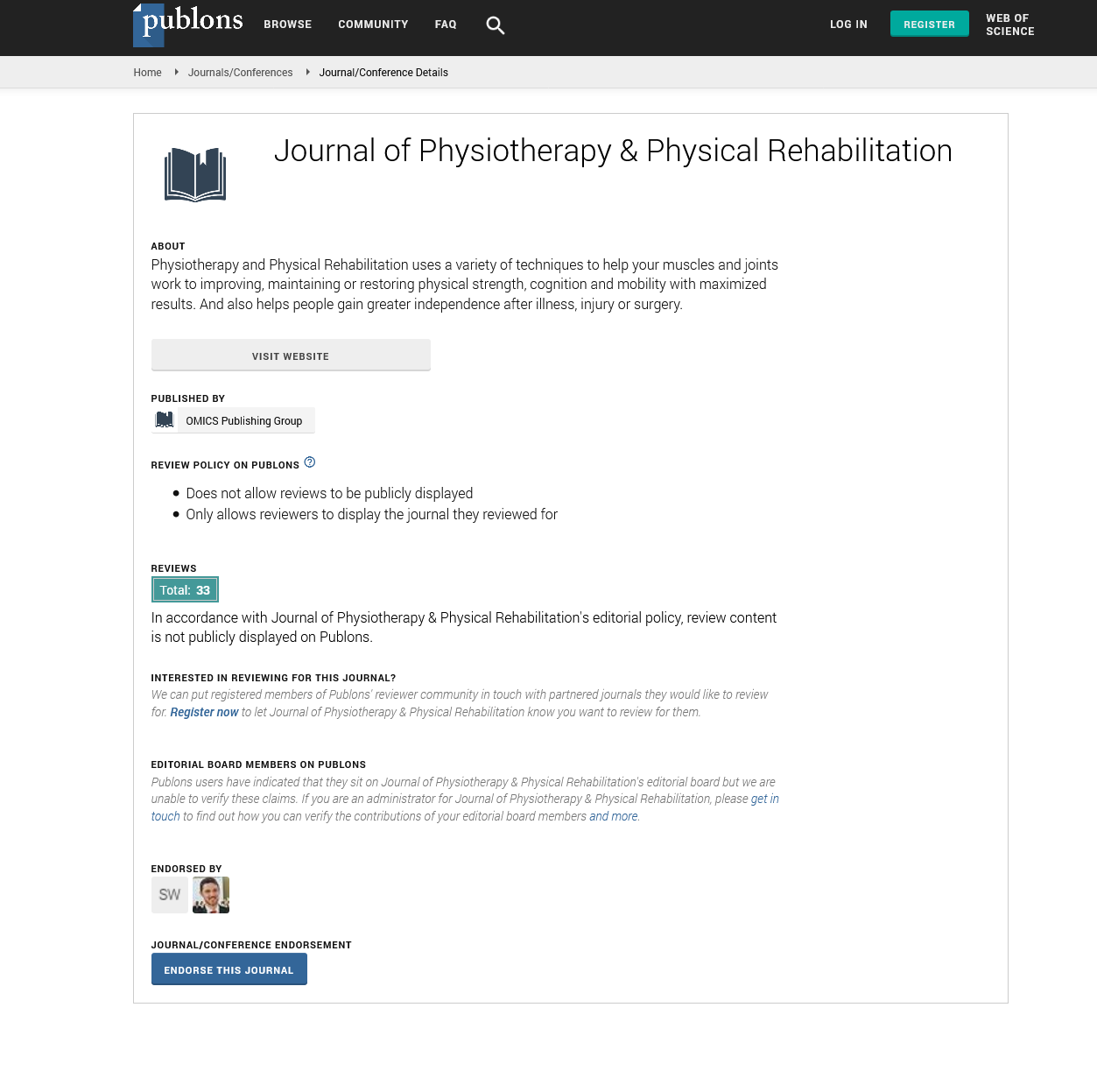