In children, Extra Medullary Hematopoiesis (EMH) is a compensatory response to severe chronic anemia, particularly in the context of B thalassemia. Its localization, variable, is mainly hepatic, splenic and ganglionic but all the other organs, including the skin, can be reached. Rare, most often asymptomatic, EMH can be manifested by a mass syndrome. The anamnesis and the imaging bring arguments in favor of the diagnosis, sometimes difficult to establish, without resorting to invasive examinations. Thanks to therapeutic progress, the surgical treatment has become rare, reserved for certain special cases. We report the case of a patient with major B thalassemia, in whom the appearance of an abscessed abdominal mass has revealed several foci of EMH.

A 15-year-old girl, born of consanguineous parents in apparent good health, followed for a severe chronic anemia due to a major B thalassemia was splenectomized at the age of 3. The spleen, multi micro nodular, whose histological examination showed signs in favor of extra medullar hematopoiesis (Figure 1), weighed 720 grams. Until that age, she has received several transfusions of red blood cells, sometimes at a rate of 2 or 3 per month. She was referred to our pediatric surgery department for a superficial abdominal mass of 9 × 6 cm, evolving since an indefinite date, with inflammatory signs since 6 days without any triggering factor. 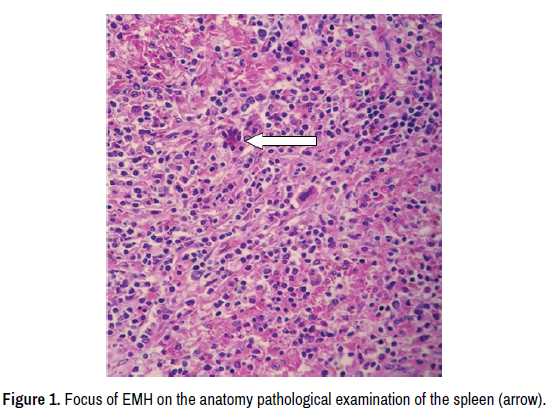 Figure 1. Focus of EMH on the anatomy pathological examination of the spleen (arrow).

On inspection, the girl, with a stature and weight delay (-2 percentiles), was feverish at 38.4 °C. His abdomen was distended with a left costal scar in connection with splenectomy and shiny skin. She had an abdominal mass, ten centimeters above the umbilicus, right lateralized (Figure 2), sensitive and fluctuating. The palpation also revealed homogeneous hepatomegaly at 14 cm. Abdominal CT scan showed the hepatomegaly with 2 intra hepatic masses, a lumbar para spinal formation and the parietal collection with heterogeneous appearance (Figures 3-5). The biological assessment revealed a hyperleukocytosis with a white blood cells count of 15000/mm3 and elevation of CRP level to 120. It was also a hypo chromic, microcytic anemia (hemoglobin: 5.8 g/100mil) requiring a new phenotype blood transfusion. Since the age of 5 years, the patient had an iron chelation therapy but never had erythropoietin. The parietal abscess was flattened and the anatomy-pathological examination of a fragment of tissue taken at this level showed an inflammatory necrosis with foci of megakaryocytes and erythroblasts suggestive EMH. In front of the anamnesis (Foci of EMH at the macroscopic aspect of the spleen), the clinical context (severe chronic anemia and hepatomegaly), the imaging features and the anatomy pathological data, we concluded to EMH for the intra-abdominal foci with a probable cutaneous location. 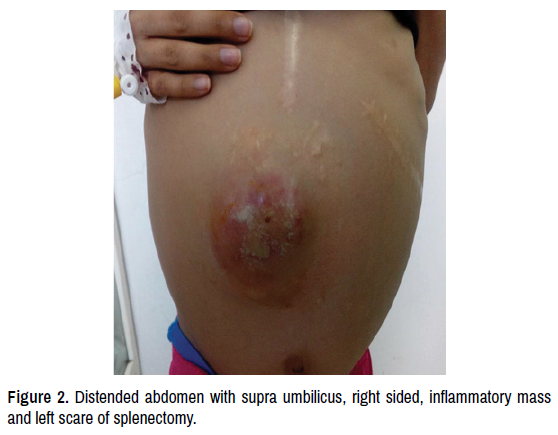 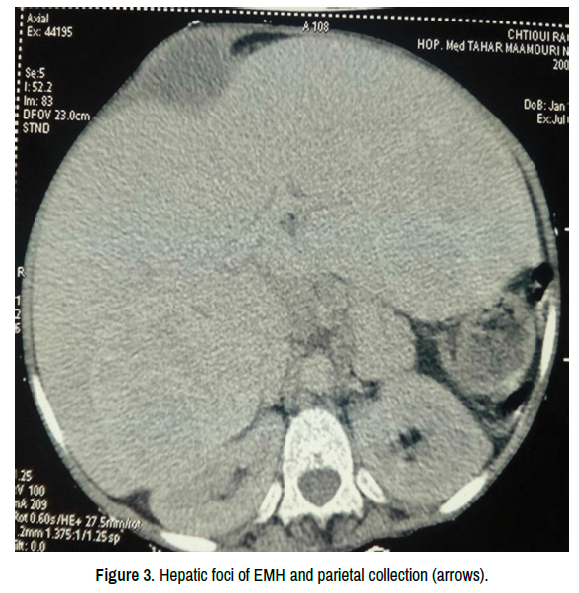 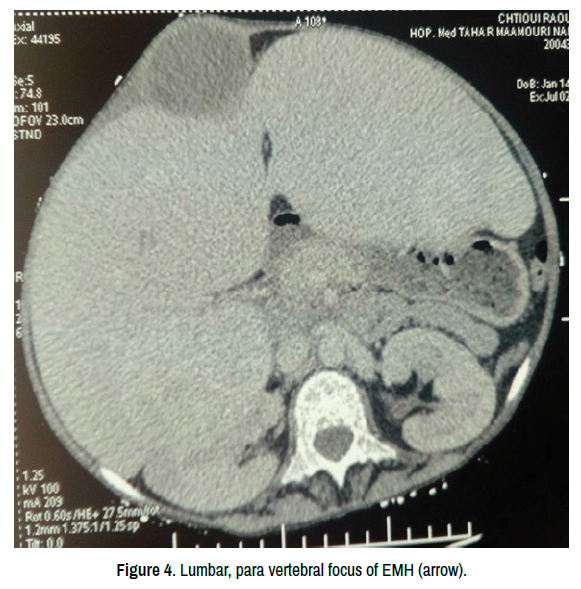 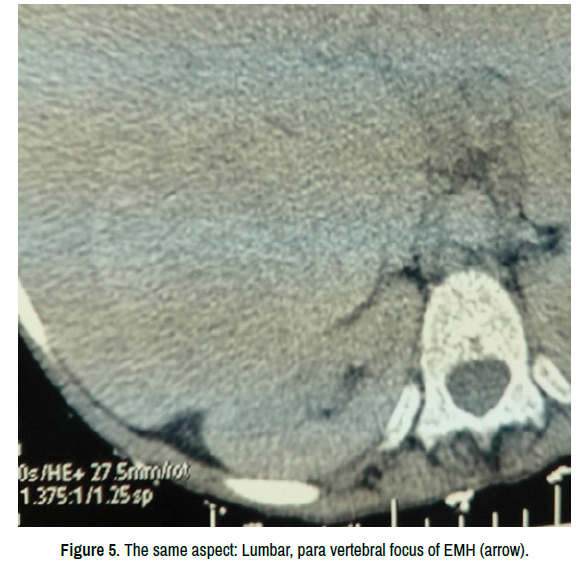 The embryonic and fetal hematopoiesis, starting in the yolk sac at the 20th day of the intra uterine life is continuing in the liver from the 30th day until the first day after birth. Between the 4th and the 5th month, the medullary hematopoiesis, quickly supplants the spleen. Cutaneous hematopoiesis, that concerns the entire skin coating, occurs in the 5th week and disappears in the 34th- 38th week of gestation [1-3]. After birth, the bone marrow is the only active site [1,3]. In a pathological context of severe anemia (like thalassemia, hereditary spherocytosis or sickle-cell anemia in children) and chronic myeloproliferative disorders, the production of hematopoietic cells can be done in various sites [4,5]. If the liver, the spleen and ganglia are the most often involved, any organ can be touched, including the nervous system, the urogenital and digestive tracts, the mediastinum and all the organs it contains, the osteoarticular apparatus and much more rarely the skin. This non-exhaustive list.

Demonstrates the multiplicity of locations of the extra medullary hematopoiesis (EMH) and the diversity of her clinical manifestations with the difficulties of a differential diagnosis [4,5]. The site of EMH can be single or multiple, touching several organs at the same time [5]. In children, skin is a very rare location of EMH. It can have many aspects like localized or diffuse.

Erythematous plaques, nodules, ulcer or bubbles and can be the source of differential diagnoses difficulties. Its secondary infection is exceptional and, to our knowledge, never been reported in the literature.

On ultrasound and CT scan, in its pseudo-tumor form, the focus of EMH appears like a well-circumscribed mass, sometimes polylobed, hypo dense and heterogeneous or diffusely echogenic because of the coexistence of fat [5-7]. The role of radionuclide bone-marrow imaging using indium-111(111In), chloride (111 In Cl3), or 99 mTc sulfur colloid in the evaluation of EMH has not yet been clarified [8]. Only the histological examination made from a biopsy, an excision piece or even from material obtained by aspiration with a fine needle allows the diagnosis of certainty [8,9]. Classically diagnosed on the presence of the three hematopoietic lines, HEM can be evoked on the mere presence of megakaryocytes [1-11]. In our patient, the anatomy pathological examination of a fragment of tissue taken from the wall of the abscess showed an inflammatory necrosis with foci of mega karyotypes suggestive EMH. Faced with the risk of hemorrhage, due to the hyper vascularized nature of the foci found by the scanner in the liver, we did not do biopsies. The treatment involves several means such as regular transfusions, hydroxyurea or low-dose radiotherapy, in immunotherapy or variously associated between them to reduce the size of the mass. Surgical resection is only used in symptomatic cases, when there is a compression phenomenon in the mediastinum or in the urinary, respiratory, digestive or nervous system. Bone marrow transplantation seems a promising path but requires expensive equipment and highly qualified staff [10,11].

In major B thalassemia as in many severe chronic anemias, the occurrence of foci of extra medullary hematopoiesis can be seen. The cutaneous localization is very rare and its super infection is exceptional. The clinical context, the imaging data and the pathological examination allow the diagnosis to be made. The therapeutic attitude is conditioned by the repercussions of the foci of topic hematopoiesis, ranging from expectation to surgery. Surgical treatment has become rare, reserved for certain special cases, like abscesses or vessel compression. Actually, treatment is essentially based on a medical approach, with stem.

Cells transplantation being the best therapy.