Atmospheric corrosion is controlled by complex electrochemical and physical reactions occurring on metallic surface. Aluminum (Al) and Titanium (Ti) were used
for atmospheric corrosion resistance purpose. It is achieved through thin metallic layer coated on steel samples during one-year exposure. The composition and
structure of products formed and developed on steel and Al/Ti coated on steel surface during exposure period have been investigated by using X-ray Photoelectron
Spectroscopy (XPS). The results obtained showed the structure of lepidocrocite in the rust layer of steel and Ti coated steel. However, for the Al coated steel
sample, the structure found was goethite.

Atmospheric corrosion is a degradation process of metals exposed to atmosphere. It is influenced by the instantaneous (relative humidity) and cumulative (deposition of pollutants) effects formed by the local environment’s constituents on the metal surfaces [1]. The atmospheric corrosion kinetic depends mainly on exposure time, relative humidity, temperature and the presence of pollutants. Taking in account the concentration of these pollutants, the atmosphere exposure was divided into rural, urban, industrial and marine atmosphere [2]. The rural environment is known for its very low pollutants concent¬¬ration which has no effect on corrosion. The urban atmosphere is practically similar to the rural atmosphere, with the presence of a few pollutants. Whereas the industrial environment contains the major industrial pollutants like chloride (Cl), sulfur dioxide (SO2) and nitrogen oxides (NOx) which cause severe corrosion. The marine environment is mainly known for its high concentration of chloride, which promotes directly the metal corrosion [3].

Researchers were interesting on the study of atmospheric corrosion since the beginning of the last century. The prediction of metal performance therefore become evident. An accurate evaluation of atmospheric corrosion provides an important guideline for materials selection and engineering design. To fulfill this aim, researchers explored the rust layer in order to identify the relationship between the rust layer, exposure time and finally the influence of pollutants concentration. The rate corrosion is often calculated from the weight loss of the specimen during the exposure time. The use of characterization techniques is doubtless evident to study the morphology and the composition of the rust layer formed after atmospheric corrosion.

Antunes and Castano reported on their studies that lepidocrocite and goethite are the predominant products in rust layer of steel exposed to industrial and urban atmosphere in the region of Brazil and Columbia respectively [4,5].

For long- time exposure, De la Fuente et al. investigated the atmospheric corrosion of mild steel by using different characterization techniques [6]. They observed the rust layer morphologies formed was flowery structures of lepidocrocite, cotton ball structures of goethite and cigar- shaped crystals of akaganeite during exposure to rural, urban and industrial atmospheres, however, it was sandy crystal in marine atmosphere.

Mendoza et al. in their study discussed the indoor and outdoor atmospheric corrosion of carbon steel [7]. They found that the corrosion rate increases significantly with wetness time and with Cl and S compound deposition on surface metal.

To investigate deeply the atmospheric corrosion phenomena, the use of advanced tool is crucial. Downscaling dimensions analysis methods are helpful for this purpose. X-ray photoelectron spectroscopy (XPS) is used in many fields of solid-state and surface science. It provides informations about the elemental composition, the chemical state, and especially for the surface bonding.

Meziane et al. in their studies on steel atmospheric corrosion resistance by means of thin layer metals coating [9]. They conclude that Al offers better protection of steel against atmospheric corrosion. Whereas the rust layers morphology and the identification of predominant compound were reported.

The present study focused on the chemical interaction involved on rust layer formed during the atmospheric corrosion by using XPS technique.

Steel samples (S235JR) were coated with Al and Ti thin film for protective purpose against atmospheric corrosion. The residual pressure was 2 10-6 Torr and the purity of metals was 99.99%. The main steel composition is given in Table 1.

We started experimentation by weighing the samples and exposed them to atmosphere. The location of exposure is taken into account as urban atmosphere; it is situated within the suburbs southwest of Algiers (Algeria). Characterized in summertime by high relative humidity of 60%- 70% and heat of 25°C -35°C. In winter, the relative humidity reaches 80% and means temperature is about 10°C. It is vital to understand that the location is exposed to heavy highway transport, which could suggest that the most source of pollutants is that the vehicle emissions.

The rust layer formed is investigated by means of XPS. This analysis aims to demonstrate the composition and the chemical bonds invo lved.

The XPS studies were carried out in SIENTA-OMICRON tool using Al Kα (hʋ=1486, 6 eV) radiation. The angle between the specimen surface and the direction of photoelectrons to the detector is 30°. The emitted photoelectrons were collected by a lens system and their kinetic energy was measured with a hemispherical analyzer. The vacuum of the specimen chamber for XPS measurements was 10-8 mbar during measurements. An energy increment of 0.05 eV was used. The XPS data consisted of survey scans and regional scans over the photoelectron peaks of interest. They are obtained after subtracting the background, which was calculated by Shirley procedure.

It is important to add that the surface cleansing methods, were not employed in this work in order to conserve the surface layer of the samples. It may result the absorbance of water molecules or leading of atoms oxygen by hydrocarbon molecules.

X-ray photoelectron spectra of steel coated with Al and Ti thin layer were measured in the regions of the binding energy between 50 and 1400 eV. Charge shifting of the spectra was corrected by using the C 1s peak from adventitious carbon at 285 eV binding energy. Intensity ratios of various photoelectron peaks were obtained by fitting the spectra with a least-squares routine using 100% Gaussian peak shape. Further, these measurements are expected to provide informations on important issues such as chemical bonding and iron oxidation state.

A survey spectrum was first recorded to identify the elements present on the samples surface after one year exposure as shown in Figure 1.

Figure 1. Survey spectrum for the samples after one year exposure to urban atmosphere. (a) Steel, (b) Al coated steel, (c) Ti coated steel

A quantitative analysis was done for the major elements detected with high resolution spectra of Fe 2p, O 1s and C 1s elements.

The obtained spectra were fitted, after background subtraction following the Shirley procedure, with Gaussian curves modified by a tail f unction.

These results are in line with those reported previously [11-13]. Furthermore, the C 1s spectrum of steel raised binding energy at 284 and 288 eV which are attributed to C-C and C=O (carboxylic). This result is confirmed with those found by Smith [14]. The study focused on C 1s peak deconvolution and interpretation taking into account the molecular modeling studies. The Figure 2 shows the C 1s core level XPS spectra.

Figure 3 shows the O 1s core-level XPS spectra for the three samples. The discrepancy in the binding energy of Al and Ti coated steel compared to bare steel can be explained by the partial transfer of iron electrons to the oxygen ion [15]. The deconvolution of the O 1s spectra reveal the coexisting of O, OH and H2O species. For the steel sample, the position of the corresponding binding energy is 532, 531 and 533.2 eV respectively. Similar bond energies are obtained for the Ti coated steel sample, i.e., 531, 532.5 and 534.5 eV assigned to hydroxide (OH), oxygen oxide (O2-) and O of water. On the other hand, the deconvolution of Al coated steel sample, exposed the binding energies of at 531.5 and 533.5 eV, which are associated with oxygen of hydroxide group (OH) and oxygen of water respectively. These binding energies are in line with those reported in literature [13,16,17].

According to previous research [16,18], the OH corresponding band of goethite is situated at 531.1 eV. Besides the investigation of the sorption of neptunil on goethite by XPS, the author reported the position line of OH group; it was at 531.5 eV [13]. The comparison of results leads to confirm, that the actual results are in perfect agreement with the previous works cited above. Reliably, this confirms that the predominant hydroxide formed on the rust layer of Al coated steel samples is indeed goethite.

Figure 4 shows Fe 2p spectra obtained for the three-specimen exposed to urban atmosphere for 1 year. A shifting of 2 eV in binding energy for metals (Al and Ti) coating steel is noted. It is probably due as mentioned before, to the partial transfer of iron electrons to the oxygen ion [15]. 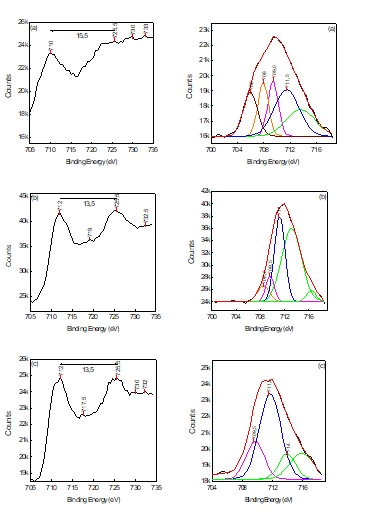 The Fe 2p spectra of Al and Ti coated steel samples display the presence of a main band at 712 eV, accompanied by another at 725.5 eV, measuring consequently a spin - orbit couple of 13.5 eV. In addition, one can see the appearance of satellite peak at 719 and 717.5 eV respectively. This result demonstrates that iron oxidizes during exposure to atmosphere.

By subtracting the background using Hansen and Tougaard formalism, the Fe 2p spectrum displays the presence of Iron at three chemical states: metallic (Fe0), divalent (Fe2+) and trivalent (Fe3+). The Fe 2p spectrum decomposition for the steel sample has shown the binding energies at 711.5, 709.5 and 706 eV attributed, according to previous studies [19-21], to Fe trivalent (FeOOH), Fe divalent and metal respectively. The same binding energies were obtained for the metal coated steel which indicated the formation of hydroxides at 711 eV (Al coting) and 711.3 eV (Ti coating). The Fe divalent appears at 709.5 eV for both metal coating.

These binding energies assigned for the three samples studied are similar to the results reported on the XPS study for goethite and lepidocrocite. Amongst, Kosin et al [22], has shown that the OH hydroxide group of goethite appears a binding energy of 711.0 - 711.2 eV, whereas for lepidocrocite the binding energy is situated at 711.6 eV. The results found in this work are in perfect agreement with previous work and with the literature [13,16,22-26].

The actual spectra show the presence of divalent and trivalent oxidized iron (Fe2+, Fe3+). We noted the preponderance of Fe3+ for the Al and Ti coated steel samples. This reflects the predominance of iron hydroxide, goethite and lepidocrocite respectively. The decomposition of the steel sample indicates the almost equal presence of divalent, trivalent and metallic iron (Fe2+, Fe3+ and Fe0). The Table 2 summaries the area values and the different binding energies found for the three samples used in this study.

The Al and Ti metals which were used as thin layer coated on steel, did not allow reliable registration of the absorption signal. This is probably due to the limited sensitivity of this analysis for elements in very weak concentration.

In the present study, we investigate the impact of urban atmosphere on the steel corrosion process. The atmospheric corrosion of steel and steel coated with Al, and Ti was followed during one-year exposure. The corrosion product was deeply studied and characterized using XPS analysis. From these investigations, the following main conclusions can be dra wn.

• The core-level O 1s spectra for the metal coated steel rust surface was enriched in water which involves the atmospheric corrosion. Water is required to produce the ferric oxyhydroxide. The adsorption of water on steel surface is generally underestimated by the XPS studies, due to the weak adsorption and thus, disappears spontaneously in vacuum.

• It was able to distinguish the ‘metallic’ and ‘oxidized’ states of iron. In the present work, the proportion of iron at different oxidation states was carried out for the three samples. This suggests that the state of iron oxidation is more important when exposed to the free atmosphere. The method used in this study, can be spread also to the other metal hydroxide.

• The elementary identification of hydroxides showed the predominance of lepidocrocite for steel and Ti coated steel samples. However, for the Al coated steel sample goethite was the prevalent hydroxide. This result is in line with those found previously using SEM and RS techniques. 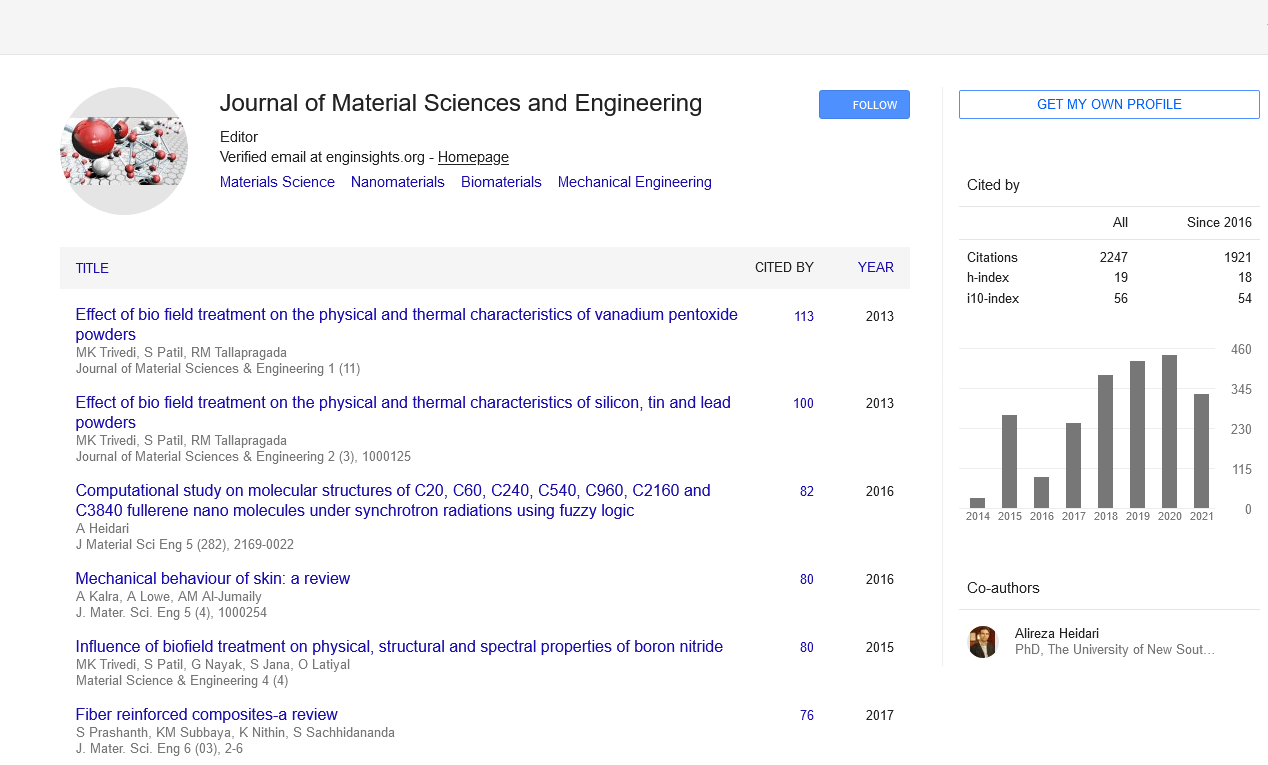